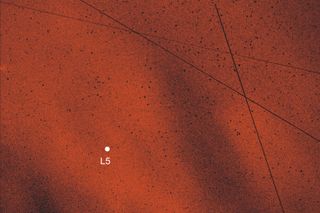 Scientists have found strange "dust moons" around Earth that follow our planet from afar. In this image, the central region of the Kordylewski dust cloud is visible (bright red pixels). The straight tilted lines are traces of satellites. The L5 point in white is the Earth-moon L5 Lagrange point.
(Image: © J. Slíz-Balogh)

Dust clouds that orbit Earth like moons may finally have had their existence confirmed after more than a half-century of controversy, new research finds.

Lagrange points can exist between other pairs of bodies, and previous research detected more than a million asteroids at the sun-Jupiter L4 and L5 points, as well as the asteroid 2010 TK7 at the sun-Earth L4 point. Prior work also suggested that at the Earth-moon L5 point, two clouds of dust might exist, ones first reported by and named for Polish astronomer Kazimierz Kordylewski in 1961. [Earth Quiz: Do You Really Know Your Planet?]

Now researchers suggest they may finally have confirmed that this pair of dust clouds is real. The scientists detailed their findings in two studies online Sept. 1 and Oct. 1 in the journal Monthly Notices of the Royal Astronomical Society.

The Kordylewski clouds are exceptionally faint, and whether one can see them with the naked eye or normal cameras depends heavily on the state of the weather. As a result, many scientists have doubted their existence for decades, Gábor Horváth, a physicist at Eötvös Loránd University in Hungary and co-author on both studies, told Space.com.

The researchers next sought to detect the Kordylewski clouds using a digital camera at a private observatory in Hungary. The camera was equipped with polarizing filters that only let in light with specific polarizations.

"Now we find new observational evidence for the existence of the Kordylewski dust clouds around the L5 point of the Earth-moon system," Judit Slíz-Balogh, an astronomer at Eötvös Loránd University in Budapest and lead author of both studies, told Space.com.

"The Kordylewski clouds are two of the toughest objects to find, and though they are as close to Earth as the moon are largely overlooked by researchers in astronomy," Slíz-Balogh said in a statement. "It is intriguing to confirm that our planet has dusty pseudo-satellites in orbit alongside our lunar neighbor."

In the future, scientists can see whether dust clouds also exist at the Earth-moon L4 point, Slíz-Balogh added.