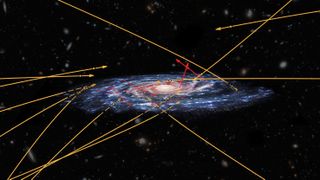 The positions and reconstructed orbits of 20 high-velocity stars, superimposed on top of an illustration of our galaxy, the Milky Way. Researchers identified these stars using data from the second release of ESA's Gaia mission. The seven stars in red are shooting away from the galaxy and might be traveling fast enough to someday escape its gravity. But the 13 stars seen in orange represent those that might be racing toward the Milky Way. They could be stars from another galaxy.
(Image: © ESA (artist's impression and composition); Marchetti et al. 2018 (star positions and trajectories); NASA/ESA/Hubble (background galaxies); CC BY-SA 3.0 IGO)

The cosmic "merry-go-round" that is our rotating Milky Way galaxy may not be the reason stars are whizzing by and seemingly flying off at high speeds.

A team of astronomers noticed something interesting when they were sifting through the recently published second data release from the Gaia mission. The European Space Agency (ESA) launched the Gaia spacecraft in 2013, and the new data release includes observations made between July 25, 2014, and May 23, 2016, according to ESA.

The data offers the positions of nearly 1.7 billion stars, and their motions can tell astronomers a lot about what our galaxy used to be like. Stars travel at different speeds and the very fastest are called hypervelocity stars. Using a level of precision that sometimes "equates to Earthbound observers being able to spot a Euro coin lying on the surface of the moon," ESA officials said in a statement describing the mission, Gaia is able to gather observations about these hypervelocity stars.

"Of the seven million Gaia stars with full 3D velocity measurements, we found twenty that could be traveling fast enough to eventually escape from the Milky Way," said Elena Maria Rossi, one of the authors of the new study, which was detailed in a recent statement by the Royal Astronomical Society in the U.K.

Or, they could be "intergalactic interlopers."

"Rather than flying away from the Galactic centre, most of the high-velocity stars we spotted seem to be racing towards it," co-author Tommaso Marchetti said in the statement. "These could be stars from another galaxy, zooming right through the Milky Way."

"Stars can be accelerated to high velocities when they interact with a supermassive black hole," Rossi added. "So the presence of these stars might be a sign of such black holes in nearby galaxies. But the stars may also have once been part of a binary system, flung towards the Milky Way when their companion star exploded as a supernova."

Rossi said studying these hypervelocity stars will answer questions about how nearby galaxies behave.

To find out where they come from — some potential origins include the Large Magellanic Cloud or the Milky Way's halo — new data will be needed. Royal Astronomical Society officials said at least two more Gaia data releases are scheduled in the 2020s.

The study detailing these findings was published Sept. 20 in the journal Monthly Notices of the Royal Astronomical Society.