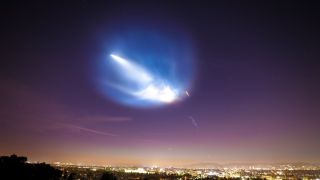 Los Angeles Mayor Eric Garcetti captured this shot of the Falcon 9 plume over the lights of LA on Oct. 7, 2018.
(Image: © Office of the Mayor/Eric Garcetti)

All rocket launches are spectacular, but SpaceX took things to another level over the weekend.

On Sunday night (Oct. 7), a SpaceX Falcon 9 rocket successfully launched the SAOCOM 1A Earth-observation satellite from Vandenberg Air Force Base on California's Central Coast. And the two-stage booster's first stage landed back at Vandenberg less than 8 minutes after liftoff, pulling off SpaceX's first-ever terra-firma touchdown on California soil.

As it rose into the sky, the Falcon 9 spawned a gigantic, gorgeous, glowing cloud that wowed folks throughout the Golden State. The twilight plume had an otherworldly feel, so some observers made a point of stressing the cloud's Earthly origin. [In Photos: SpaceX's Fantastic Nighttime Launch of SAOCOM-1 & Rocket Landing!]

"Nope, definitely not aliens. What you're looking at is the first launch and landing of the ‪@SpaceX Falcon 9 rocket on the West Coast. The rocket took off from Vandenberg Air Force Base at 7:21 p.m. and landed safely back on Earth," Los Angeles Mayor Eric Garcetti tweeted Sunday night, along with an amazing photo of the Falcon 9 cloud hanging over the city.

Another photo posted by Garcetti captured the pulses of the first stage's small reaction-control thrusters, which etched a big Wi-Fi symbol in the sky. Those thrusters were firing to keep the booster on course for its historic touchdown. (SpaceX has now pulled off 30 first-stage landings, but all the previous ones had occurred at Florida's Cape Canaveral Air Force Station or on robotic "drone ships" stationed in the Atlantic or Pacific oceans.)

Astrophotographer Sean Parker viewed the launch from Joshua Tree National Park in southeastern California and was suitably excited by the sky show.

"That was pretty FN awesome, @elonmusk @SpaceX #falcon9," Parker tweeted yesterday (Oct. 8), along with a photo of himself exulting in the desert beneath the glowing cloud.

And then there are the close-up views of the launch and landing, which SpaceX snapped. These photos are spectacular in a different way, highlighting power and precision rather than abstract and ephemeral beauty. But they are spectacular nonetheless.

SAOCOM 1A, by the way, was developed by Argentina's national space agency. The satellite will observe Earth in radar light from its perch about 385 miles (620 kilometers) above the planet, primarily to measure soil-moisture levels. This information will aid predictions of crop yields and also help planners and emergency-management officials monitor disasters such as floods and fires.

SAOCOM 1A has a twin, SAOCOM 1B, which will make similar observations. SAOCOM 1B will also launch aboard a Falcon 9, perhaps as early as next year.