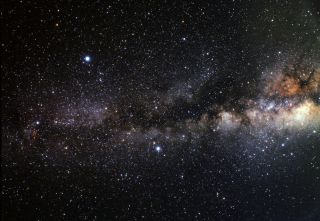 Step outside as darkness falls this week, look directly overhead and you will see a landmark of the summertime sky, the Summer Triangle, composed of the bright stars Vega, Altair and Deneb.

Over the years, people have asked me why this pattern is referred to as the "summer" and not "autumn" triangle, since it is such a prominent star pattern on these cool fall evenings. But while the Triangle is now well-placed for viewing after sundown, by 2 a.m. local daylight time it will be sinking out of sight below the west-northwest horizon. What makes it a "summer" triangle is that from early June through mid-August, we can see the first-magnitude stars Vega, Altair and Deneb anytime through the entire night.

And yet, in the coming nights ahead it will seem that the Summer Triangle will be somewhat reluctant to leave center stage. In fact, even as late as Nov. 16 — what we would define as late fall — the Triangle will still be soaring high in the western sky as darkness falls. Why would a star pattern so closely identified with balmy summer nights still be very much in evidence as we approach the cold wintry months? [The Top Skywatching Events to Look for in 2018]

Two factors come into play to explain this phenomenon. The first is what we call the sidereal day: a day that is measured by the positions of the stars. Ask anyone how long it takes Earth to rotate once on its axis and the most likely answer will be 24 hours.

And that answer would be wrong.

Actually, our Earth makes one complete turn on its axis just 4 minutes shy of every 24 hours; put another way, the turn takes 23 hours and 56 minutes. As a result, the stars appear to rise and set 4 minutes earlier each day. More on that in a moment.

Our conventional 24-hour day is called a solar day and is based on the rotation of Earth, plus the movement of Earth in its orbit around the sun. Mean solar time is 24 hours long but is based on the computed position of a "fictitious" sun. We cannot use the real sun, because Earth moves in an elliptical orbit — meaning that it is moving around the sun at a variable rate of speed — faster when it's closer to the sun, slower when it's farther away. So there will be times during the year when the sun crosses the meridian (its highest point in the sky) some minutes before noon, while at other times it crosses the meridian some minutes after noon. Those with sundials are aware that more often than not, the sun either runs fast or slow, so a correction needs to be made using a measure of the discrepancy that's known as the "equation of time."

Hence the need for a fictitious or "mean" sun to which our clocks are based: a 24-hour day.

Now, let's go back to the sidereal day. You can verify yourself that Earth spins on its axis in less than 24 hours by conducting the following experiment. Choose a window that faces east, south or west and through which you can see stars. Select a star near the edge of the window frame. Stick a pin into the window frame, on the inside, so that the pinhead is in line with the star as you see it. Now line up the star and the pinhead with some nearby landmark, such as a telephone pole or a neighbor's chimney. Write down the day, hour and minute when you lined up the pinhead and landmark with the star. If you sight your star again the following evening, you'll find that it lines up with both the pinhead and landmark 4 minutes earlier than it did the previous night.

And those 4 minutes can really add up, even over just a short interval of time. By the end of a 30-day interval, for instance, the stars appear to rise and set a full 2 hours earlier.

So how come we see the Summer Triangle in virtually the same position in the sky after sunset at the beginning of October as we will six weeks later, in mid-November? Along with the stars backtracking in their nightly course by 4 minutes, for north temperate latitudes at this particular time of the year, the amount of daily sunshine is rapidly diminishing — by an average of roughly 2 to 3 minutes per day. Working in concert with the sidereal day, the positions of the stars and constellations in our current, early-evening sky are seemingly "frozen." As the stars drop back each night by 4 minutes, that interval is partially compensated for by the sun setting a couple of minutes earlier each evening.

Of course, the Triangle isn't truly "frozen." From the start of October through mid-November, it does get lower in the early evening sky, but that change is subtle. And once we get to within a month of the December solstice, the shortening of the days begins to slow. At the solstice, the length of daylight reaches a minimum and then, ever so slowly at first, the interval of daylight begins to lengthen. And after mid-January, the lengthening of the days becomes more perceptible.

Nonetheless, even after mid-November, the Summer Triangle will continue to remain in view in our evening sky, though appearing to set more rapidly on a night-to-night basis through the end of the year. In fact, our last views of it will come in mid-January as it sits just above the west-northwest horizon at dusk.

So, when we get to that particular time in the winter season, bundle up, head outside after sundown and get your last evening view of this souvenir of summer.

Joe Rao serves as an instructor and guest lecturer at New York's Hayden Planetarium. He writes about astronomy for Natural History magazine, the Farmers' Almanac and other publications, and he is also an on-camera meteorologist for Verizon FiOS1 News in New York's Lower Hudson Valley. Follow us @Spacedotcom, Facebook and Google+. Original article on Space.com.