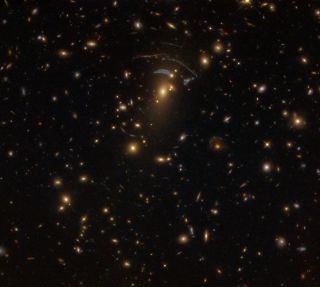 The galaxy cluster named SDSS J1138+2754 acts as a natural gravitational lens, distorting the view of other cosmic object that lie behind it.
(Image: © ESA/Hubble & NASA)

NASA's Hubble Space Telescope photographed a stunning galaxy cluster whose gravity acts as a natural lens, bending and blurring the view of galaxies that lie behind it.

The galaxy cluster, also known as SDSS J1138+2754, was photographed using Hubble's Wide Field Camera 3. When a massive object, such as a galaxy cluster or a black hole, falls between an observer (like the Hubble telescope) and a more distant target in the background, it creates a so-called gravitational lens that magnifies the observer’s view.

Specifically, the powerful gravitational force of SDSS J1138+2754 distorts the space around it, causing light from objects in the background to travel along curved paths. As a result, the more-distant spiral and elliptical galaxies appear stretched into long, smudged arcs and scattered dashes, according to a statement from the Hubble Space Telescope. [Celestial Photos: Hubble Space Telescope's Latest Cosmic Views]

"Gravity is so much a part of our daily lives that it is all too easy to forget its awesome power — but on a galactic scale, its power becomes both strikingly clear and visually stunning," the statement said.

What's more, when the light from the distant objects reaches the observer after passing through a gravitational lens, it may appear magnified, as if it had passed through a giant telescope, or reflected.

Therefore, some of the more-distant galaxies captured in the new Hubble image appear multiple times, because the gravitational lens distorts the light from the object similar to how fun-house mirrors distort a person's reflection.

The new Hubble image was taken as part of a research project on star formation in the distant universe. In addition to SDSS J1138+2754, Hubble identified 73 other galaxies that also act as gravity lenses, according to the statement.