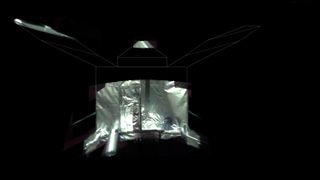 This composite selfie was taken by the Imaging Ultraviolet Spectrograph (IUVS) instrument aboard NASA's MAVEN Mars orbiter. Lines are sketched in to show approximately where components of the spacecraft are that were not able to be imaged due to the limited motion of the instrument around its support boom.
(Image: © University of Colorado/NASA)

Here's a nice twist on the Mars-explorer selfie.

We're used to seeing the photos that robots such as NASA's Opportunity and Curiosity rovers snap of themselves on the Red Planet's surface. But the agency just released a shot that the MAVEN spacecraft took of itself in Mars orbit.

The new image is a composite of 21 photos taken in ultraviolet light by MAVEN's Imaging Ultraviolet Spectrograph (IUVS) instrument, which sits on the end of a 3.9-foot-long (1.2 meters) boom. The IUVS usually monitors emissions from Mars' upper atmosphere, but the MAVEN team turned the instrument around to get the selfie. [The Top 10 Space Robot Selfies Ever]

NASA officials released the image on Sept. 21 — the fourth anniversary of the spacecraft's arrival in Mars orbit to study the Red Planet's upper atmosphere and its interaction with the solar wind, the stream of charged particles flowing continuously from the sun.

MAVEN — whose name is short for "Mars Atmosphere and Volatile Evolution" — has accomplished a lot during those four years. For example, the spacecraft's observations show that atmospheric stripping by the solar wind played a key role in the Red Planet's shift from a relatively warm and wet world long ago to the cold, dry place it is today.

This transition was likely more or less complete by about 3.7 billion years ago, MAVEN team members have said.

MAVEN data further indicate that strong solar storms kicked that background atmospheric stripping into overdrive, ramping up the loss of air molecules to space by a factor of 10 or more.

The mission, which launched in November 2013, has also discovered two new kinds of auroras on Mars that are different than the celestial light shows we're used to here on Earth. And MAVEN data suggest that the Red Planet has lost so much of its carbon dioxide to space that humans won't be able to terraform Mars by releasing the CO2 trapped in rocks and polar ice caps into the atmosphere. [Photos: NASA's MAVEN Mission to Mars]

"MAVEN has been a tremendous success," mission principal investigator Bruce Jakosky, from the University of Colorado, Boulder, said in a statement. "The spacecraft and instruments continue to operate as planned, and we're looking forward to further exploration of the Martian upper atmosphere and its influence on climate."