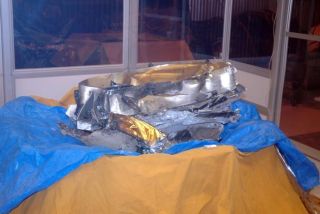 The Genesis science canister inside a clean room at the U.S. Army Dugway Proving Ground, Utah before thousands of samples were transferred to a clean room facility at NASA's Johnson Space Center in Houston.
(Image: © NASA/JPL)

HOUSTON (AP) -- Thousands of samples from the Genesis space capsule have arrived at the Johnson Space Center, where the project's curator must assemble a giant jigsaw puzzle that could hold clues to the origins of the solar system.

Wafers on five collector panels that broke into thousands of pieces when the capsule slammed into Earth last month secured samples of atoms and ions from solar wind.

The containers are stored in a locked room at the space center until scientists can figure out how to rid them of contaminants. They will eventually be moved to a clean lab, where they will be doled out to researchers.

"We did go out, collect a piece of the sun, bring it back and we do have it here,'' Stansbery said.

The billions of charged atoms - a total haul no bigger than a few grains of salt - collected since the capsule was launched into space in 2001 could explain how the sun formed 4.5 billion years ago and what keeps it fueled.

While some of the studies will be done at the space center, a majority of the atoms and ions will be studied by researchers who apply and are approved by an external advisory board.

Some 350 wafers made up the five disks that were open to the solar wind during the mission. Many of the wafers shattered like glass when the capsule slammed into the ground at nearly 200 mph. The capsule's parachutes failed to open. The disks were splattered with mud, salts and splintered capsule parts in the crash.

Stansbery said they must talk to the scientific community to understand what the impact would be from different cleaning techniques and technology for the decontamination.

"The time frame will be months longer than we had originally anticipated before we can get the samples out to the scientific community,'' she said.

Stansbery said the job is going to be labor intensive. ''It will take a lot longer and be a lot more difficult than originally planned but it is by no means impossible,'' she said.

The good news, she said, is the samples don't have to be analyzed now and will be available for researchers for decades to come, even if the process to prepare them for research takes longer than anticipated.

"We have worked so hard for this,'' she said. "Although it is a personally and emotionally challenging thing ... this is what we do. ... The Johnson Space Center is good at taking samples and safeguarding them for the future.''

Once the samples are ready for researchers, Stansbery said the hope is that scientists will be able to create fingerprints of the sun by measuring the oxygen isotopes in the solar winds.

"If they put all those little fingerprints together, it gives you a picture of what the solar system was made of and hence how the solar system evolved,'' she said. "There is no doubt that we are going to get good, important useful information from them.''