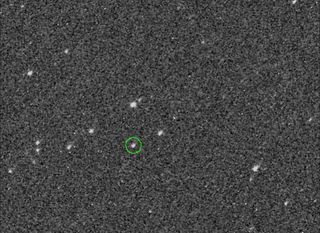 On Aug. 17, 2018, NASA's OSIRIS-REx spacecraft obtained its first images of its target, the near-Earth asteroid Bennu. OSIRIS-REx was about 1.4 million miles (2.2 million kilometers) from Bennu at the time.
(Image: © NASA/Goddard/University of Arizona)

A better understanding of Bennu's dust environment will help keep OSIRIS-REx safe as it approaches the asteroid later this year, NASA officials have said. The spacecraft is scheduled to reach Bennu on Dec. 3 and slide into orbit around the space rock four weeks later, on Dec. 31.

OSIRIS-REx — whose name is short for "Origins, Spectral Interpretation, Resource Identification, Security - Regolith Explorer" — will continue studying Bennu for a while from orbit. Then, in mid-2020, it will cruise down to the asteroid's surface and grab a sample of material, which will come back to Earth in a special return capsule in September 2023.

Scientists around the world will pore over this cosmic dirt and gravel, hunting for clues about the solar system's early days and the role that carbon-rich asteroids like Bennu may have played in delivering water and the chemical building blocks of life to Earth.

The sample will also likely be of interest to asteroid miners, as it's expected to reveal details about the resource potential of Bennu and other space rocks like it, mission team members have said.

The $800 million OSIRIS-REx mission will also contribute to planetary-defense efforts. For example, the probe's observations should help researchers better understand the forces that shape potentially dangerous asteroids' paths through space, Lauretta said during a NASA news conference last month. (Bennu itself is potentially hazardous; there's a very small chance that it could hit Earth in the late 22nd century.)

OSIRIS-REx isn't the only asteroid-sampling spacecraft that's active right now. Japan's Hayabusa2 probe arrived at its target, the big asteroid Ryugu, this summer and is currently practicing for its first touchdown maneuver, which is scheduled to take place next month.