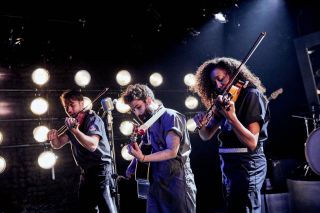 In "1969: The Second Man," folk-rock music is used to convey the heroism and tragedy in Buzz Aldrin's life.
(Image: © Chad Batka)

Spoiler Alert: Details about "1969: The Second Man" revealed below.

NEW YORK — Turn back the clock and walk through life with NASA moonwalker Buzz Aldrin in "1969: The Second Man," an inventive new musical that opened here yesterday (Aug. 28). Space.com attended a dress rehearsal of the production on August 23.

Aldrin is more than the second man to step foot on the moon. He is more than an astronaut and more than a hero. "1969: The Second Man" aims to show the man behind the spacesuit and delve beneath the surface of his life.

This musical seems, at first, like a Space Age folk-rock show. The actors take the stage in what look like flight suits, and each assumes a post at a different instrument. There are violinists, a bassist, two guitarists and a drummer. Each performer takes turns singing and re-telling Aldrin's story from a variety of perspectives; "Houston" even entertains the audience with a guitar solo at one point. [In Photos: Buzz Aldrin, Apollo 11 Moonwalker and Astronaut Icon]

In "1969: The Second Man," Aldrin's tale begins with him as an eager young engineer, hoping that his work could one day support human spaceflight. After he is chosen to be an astronaut in the great, 20th-century space race, Aldrin trains relentlessly alongside his fellow astronauts, working tirelessly and forgoing his social life. Then, in the middle of training, his mother dies by suicide.But the show isn't just a flashy, musical re-telling of Aldrin's heroic journey to the surface of the moon. Those who attend the production will learn about some of the darker aspects of Aldrin's life that the show doesn't hesitate to reveal. Jacob Brandt — the musical's creator, writer, and composer — told Space.com that he hopes this production will challenge the "idea that if you achieve something great then you will always be happy," because, as Aldrin's story illustrates, "people will expect you to be happy."

The musical infers the difficulties that Aldrin must have faced throughout this time, unable to express his emotions fully without compromising his public image as a flawless American hero.

One aspect of this re-telling, however, doesn't exactly align with the story that Aldrin himself tells. In coming to terms with being known as the "second man on the moon," Aldrin has never stated publicly that he wishes he'd been first. He has remained steadfast in this — though he did tell National Geographic in 2016 that "it does get a little frustrating" being constantly referred to as the "second man on the moon." "Is it really necessary to point out to the crowd that somebody else was first when we all went through the same training, we all landed at the same time and all contributed?"The play continues to peel away the layers of Aldrin's life, re-telling his first moments on the moon, his struggles with depression and his battle with alcohol dependence. Those who know Aldrin solely from glory-driven Apollo 11 documentaries might be surprised by how dark his life has been at times.

Despite his public contentedness with how it all went down on the lunar surface, the version of Aldrin depicted in "1969: The Second Man" is not entirely OK with his "second man" status.

While the play isn't a historical re-enactment nor a complete re-telling of Aldrin's life up until now, the production displays a thought-provoking perspective on a man who came home a hero from one of the most significant events in history.

Tickets for "1969: The Second Man" can be purchased online.