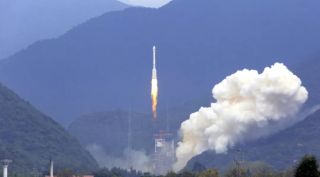 A Long March 3B lifts off from Xichang carrying the 35th and 36th Beidou satellites.
(Image: © CALT)

A Long March 3B with a Yuanzheng-1 upper stage lifted off from the Xichang Satellite Launch Center in southwest China at 7:52 p.m. Eastern Friday (11:52 UTC) sending two Beidou satellites directly into medium Earth orbits at around 22,000 kilometers altitude.

Success of the launch was confirmed by the China Aerospace Science and Technology Corporation (CASC), the main contractor for the space program, around four hours after launch, following direct insertion of the satellites into preset orbits. [China in Space: The Latest News and Missions]

The launch was consistent with airspace closure notices issued days earlier which signaled impending activity. A post on Chinese social media platform Sina Weibo suggests that partial booster or first stage wreckage had been discovered downrange in Guangxi province, to the southeast of Xichang.

The satellites are the 35th and 36th orbited for the Beidou system, China's answer to the U.S. GPS precision timing and navigation system, following the first launch in 2000. The pair were developed by the Innovation Academy for Microsatellites of the Chinese Academy of Sciences.

China is seeking to complete the system of 35 active satellites by 2020 to provide global GNSS coverage, with 27 satellites in medium Earth orbits, five in geostationary orbit and three more in inclined geosynchronous orbits.

Along with civilian uses such as navigation and positioning, Beidou will also provide weapons targeting, guidance and other services for the People's Liberation Army, removing previous Chinese military reliance on GPS.

Friday's launch was China's 23rd of 2018, surpassing the national record 22 set during 2016. CASC is aiming to carry out around 35 launches in total this year, indicating a large jump in activity. Emerging commercial companies Landspace, OneSpace and Expace expected to further contribute to Chinese launches this year.

The increased launch cadence underlines China's intent to pursue a full range of space capabilities and technologies, but also indicates that the country has a long way to go to catch up with other powers.

"The Soviets had a very high launch rate during the Cold War in part because they didn't have the advanced imaging satellites the U.S. had that could send back photos electronically. They still had to launch film-based satellites and thus had to launch them more often. What matters a lot more is what those launches are putting into orbit."

"For example, the U.S. government launches far fewer satellites than China does but U.S. military and intelligence satellites are far more capable than what China is putting up. And China's launch rate is in part due to the fact that it is still building out the satellite constellations and capabilities that the U.S. already has," Weeden says, also noting that China is still far below the launch rates set by the U.S. and USSR during the Cold War.

Along with the Beidou system, China is still building its civilian Earth observation system (Gaofen) and military counterpart (Yaogan), as well as weather (Fengyun) and ocean observation (Haiyang) satellite constellations among others. Each of these has or will see a launch in 2018.

In December, China will attempt the first ever soft-landing on the far side of the moon with the Chang'e-4 lunar lander and rover, following launch of a requisite relay satellite in May, in a repurposing of backup spacecraft to the 2013 Chang'e-3 lander and rover.

More significant is the return to flight of the Long March 5, the country's heavy-lift rocket which failed during its second flight in July 2017 and brought a three-month cessation of launches.

The return to flight, which will use redesigned first-stage engines, is expected late this year, carrying a large, experimental high-throughput communications satellite, Shijian-20, to geostationary orbit.

China's major space plans, including launch of space station modules, testing a new generation of crewed spacecraft and lunar exploration ambitions including a sample return, hinge on a successful flight of the third Long March 5.

Specially designed cargo ships, Yuanwang 21 and 22, will need to leave port on the Yangtze River in the coming weeks to collect the Long March 5 rocket components from Tianjin, north China, for transport to Hainan Island in the south for launch from the Wenchang Satellite Launch Center in November or December.