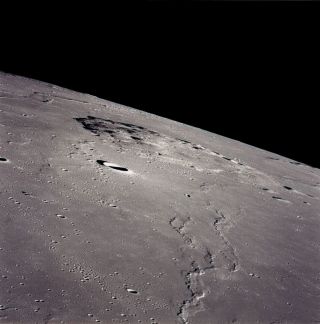 We now know a lot more about the region where China's ambitious lunar sample-return mission will touch down next year.

China plans to launch its complex Chang'e 5 mission — the first attempt to haul moon material back to Earth since the 1970s — atop a Long March 5 booster in 2019.

If all goes according to plan, the robotic Chang'e 5 will land in the Rümker region, which lies within a huge basaltic lunar plain called Oceanus Procellarum (Latin for "Ocean of Storms"). [China's Moon Missions Explained (Infographic)]

A recent paper lays out the scientific significance of this site, and what Chang'e 5 may be able to find there.

"Recent studies find that the geological features and volcanic history of the moon are far more complex than previously thought, and many of the most interesting areas have been neither explored nor sampled," states the study, which was led by Yuqi Qian of the School of Earth Sciences at the China University of Geosciences in Wuhan. "One such area is the northern Oceanus Procellarum region, which consists of very young (<2 Ga) [less than 2 billion years old] mare materials and hosts one of the largest volcanic complexes on the moon (Mons Rümker)."

For the study, the research team conducted a detailed geological mapping of the Rümker region using imagery, spectral and altimetry data.

The scientists identified 14 geological units, constructed a geologic map and outlined the geologic history of the area. The team also assessed the scientific importance of each unit, and found that the young mare basalt unit is the most valuable for sample return and is therefore a top priority.

According to Chinese news services, Chang'e 5 comprises four parts: an orbiter, a lander, an ascender and an Earth re-entry module.

The lander and ascender form a combination that will touch down on the moon to conduct lunar sampling duties. The plan calls for grabbing about 4.4 lbs. (2 kilograms) of material from the surface and subsurface, up to 6.5 feet (2 meters) in depth. This sample will then be rocketed into lunar orbit, followed by an autopilot docking and transfer of the material to the mission's re-entry module.

Getting this stuff back to Earth would be a big deal. No new lunar samples have made their way into terrestrial laboratories since the former Soviet Union's Luna 24 mission pulled off the feat in 1976.

Laboratory studies of lunar samples from Apollo and Luna missions have helped to answer numerous fundamental questions about the moon and heralded the beginning of a golden age of lunar research that continues to this day, the research paper explains.

"However, most of the moon remains unexplored, and there are still many unanswered scientific questions that remain to be addressed by returned samples," the study states.

The Chang'e 5 mission provides a great opportunity to address such outstanding issues, according to the paper. Samples from each geologic unit in the area have specific scientific importance, which should be ranked to maximize the science outcomes.

A safe and science-rich site

The study authors recommended that Chang'e 5 touch down in an eastern portion of Rümker known as Em4. The deposits there are less than 2 billion years old, making them quite young by lunar standards.

This area is not only the very highest scientific priority but also very favorable from an engineering and landing safety point of view, the paper points out. "It offers a relatively safe landing site, which is regionally flat, young and is really homogeneous and so does not require pinpoint landing," the study authors wrote.

To date, no samples have been returned from such young lunar units. Therefore, there is a high level of uncertainty about the size-frequency distribution ages in the last half of lunar impact chronology, according to the study.

If successful, Chang'e 5's return of samples from these young basalts would provide an absolute calibration for cratering rates — an accomplishment that would help scientists gain a better understanding of the geological evolution of planetary bodies throughout the solar system, the paper states.

The paper, "Geology and Scientific Significance of the Rümker Region in Northern Oceanus Procellarum: China's Chang'E-5 Landing Region," was published online in May in the American Geophysical Union's Journal of Geophysical Research: Planets.