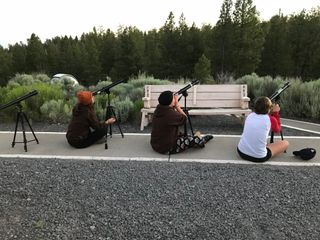 Girl Scouts of the USA (GSUSA) is debuting a set of new badges to encourage girls ages 5 to 18 to explore, observe and investigate the universe like "real space scientists," the organization announced last month.

Part of next year's rollout of 30 badges in science, technology and math, as well as the outdoors and life skills, the new badges will serve as the culmination of "fun, age-appropriate" projects for Girl Scout Daisies (grades K-1), Brownies (grades 2-3) and Juniors (grades 4-5). Space Science badges for Cadettes (grades 6-8), Seniors (grades 9-10) and Ambassadors (grades 11-12) will be released at a later date, GSUSA said.

The badges, which were funded by NASA's Science Mission Directorate, were developed by GSUSA in collaboration with the SETI Institute, the University of Arizona, Aries Scientific, the Astronomical Society of the Pacific, and Girl Scouts of Northern California.

They're also part of GSUSA and the SETI Institute's broader "Reaching for the Stars" initiative, which includes "train the trainer" workshops for girls and volunteers, such as the Astronomy Camp for Leaders at the University of Arizona; the Girl Scout Astronomy Club training at NASA's Goddard Space Flight Center in Greenbelt, Maryland; and the Girl Scouts' Astronomy Adventure Destination at the University of Oregon's Pine Mountain Observatory. Participants learn how to operate telescopes and observe the night sky, among other space science activities.

"Girl Scouts is excited to celebrate the release of these new space science badges with SETI and NASA," Sylvia Acevedo, CEO of GSUSA and a former engineer at NASA's Jet Propulsion Laboratory, said in a statement. "As a rocket scientist myself, I first developed my passion for space and astronomy on a camping trip with my Girl Scout troop. It's so exciting to think how earning these badges will expose the next generation of girls to new passions, new pursuits, and new ways of thinking about the cosmos."

On Aug. 14, GSUSA and the SETI Institute celebrated the release of the new badges during the launch of NASA's Parker Solar Probe, the first mission to "touch" the sun.