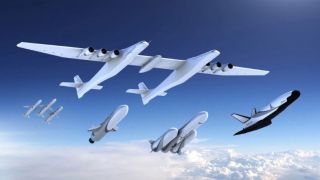 Now we know exactly how Stratolaunch Systems plans to get satellites to orbit.

All of them will blast their way to orbit after being dropped at altitude from a mother-ship plane — the largest aircraft ever built, with a wingspan of 385 feet (117 meters). [Stratolaunch Test Photos: The World's Largest Plane in Action]

"We are excited to share for the first time some details about the development of our own, proprietary Stratolaunch launch vehicles, with which we will offer a flexible launch capability unlike any other," Stratolaunch CEO Jean Floyd said in a statement. "Whatever the payload, whatever the orbit, getting your satellite into space will soon be as easy as booking an airline flight."

Here are the four launch vehicles:

Pegasus: This rocket, which is built by aerospace company Northrop Grumman, already has dozens of air-launched missions with other carrier craft under its belt. Pegasus will be able to haul payloads as heavy as 815 lbs. (370 kilograms), and it will take flight with the Stratolaunch plane for the first time in 2020 if current schedules hold, company representatives said. (The payload capacities given here and below are what each vehicle can tote to a circular orbit with an altitude of 250 miles, or 400 kilometers.)

Medium Launch Vehicle (MLV): The MLV is a new rocket with a payload capacity of 7,500 lbs. (3,400 kg). Its maiden launch should come in 2022, Stratolaunch representatives said.

Medium Launch Vehicle - Heavy: This brawnier version of the MLV is in early development. It will feature three booster cores and the ability to loft payloads as hefty as 13,200 lbs. (6,000 kg).

Space Plane: This fully reusable vehicle will be able to haul payloads up and bring them back down to Earth, much as the U.S. Air Force's X-37B space plane does. The Stratolaunch vehicle will be robotic at first, like the X-37B. But the company plans to eventually build a crew-carrying variant as well, Stratolaunch representatives said. The space plane will be able to launch medium-class payloads, and it'll be a few years before the vehicle takes flight; it's currently in the design-study phase, company representatives said.

Stratolaunch isn't the only billionaire-backed spaceflight company developing an air-launch system. Sir Richard Branson's Virgin Orbit aims to loft satellites in this manner as well, and his Virgin Galactic company is already test-flying an air-launched space plane that will take payloads and people to and from suborbital space.