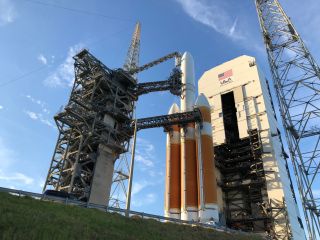 CAPE CANAVERAL, Fla. — NASA's historic mission to touch the sun is nearly ready to lift off.

A United Launch Alliance Delta IV Heavy rocket topped with NASA's Parker Solar Probe rolled out to its launch pad here at Cape Canaveral Air Force Station this evening (Aug. 10). (Actually, the mobile servicing tower surrounding the rocket rolled back, exposing the Delta IV Heavy and its payload. But the effect is basically the same.)

If all goes according to plan, the booster will lift off at 3:33 a.m. EDT (0733 GMT) tomorrow (Aug. 11), kicking off a $1.5 billion mission that will fly through the sun's outer atmosphere repeatedly, gathering key insights about solar structure and activity. You can watch the launch live here on Space.com, courtesy of NASA TV. The webcast begins at 3 a.m. EDT (0700 GMT). [The Greatest Missions to the Sun Ever]

The heavily shielded Parker Solar Probe will make 24 such close flybys over the next seven years, getting within just 3.83 million miles (6.16 million kilometers) of the sun's surface at closest approach. The sun's gravity will accelerate the spacecraft to record-breaking speeds during such encounters; at its fastest, the Parker Solar Probe will go about 430,000 mph (690,000 km/h), NASA officials said.