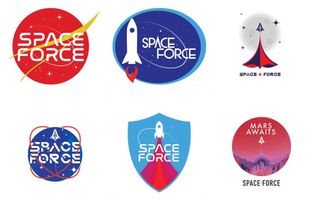 If the United States creates a Space Force, what should its logo look like?

Shortly after Vice President Mike Pence revealed detailed plans for the creation of a sixth branch of the U.S. military on Thursday (Aug. 9), a political action committee (PAC) called "Trump Make America Great Again Committee" — which is part of Donald Trump's 2020 presidential campaign — sent out a mass email asking its supporters to vote on a new logo.

The PAC email features six logos made to look like mission patches, one of which is almost identical to NASA's official logo. Rockets and other spaceships adorn the other five logos. One logo seems to imply that the Space Force is going to Mars, with the phrase "Mars awaits."

During his speech at the Pentagon on Thursday, Pence said the Trump administration is hoping to instate a Space Force by 2020. Whether the United States is really "going to have the Space Force" has yet to be determined, because only Congress has the authority to establish a new branch of the military. But that hasn't stopped Trump's campaign from attempting to monetize the idea.

"As a way to celebrate President Trump's huge announcement, our campaign will be selling a new line of gear," the PAC wrote in the email to its supporters. "But first we have to make a final decision on the design we will use to commemorate President Trump's new Space Force — and he wants YOU to have a say."

Only Trump's campaign donors can officially vote for a logo via the email sent directly from the Trump Make America Great Again Committee.