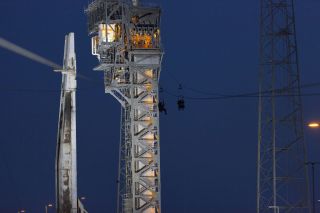 Astronauts in danger on Boeing's new space capsule will be able to jump into bright orange seats and whoosh down zip lines to get away from their spacecraft before liftoff. And this summer, the space flyers got the chance to test out the superfast emergency-evacuation system.

In the event of an emergency prior to the liftoff of a Boeing/United Launch Alliance spacecraft with passengers, this special egress system would get them to safety.

The Boeing CST-100 Starliner crew capsule— which can carry up to seven astronauts at a time to the International Space Station and is set to fly its first crewed test mission in early 2019 — will launch atop United Launch Alliance Atlas V rockets for the foreseeable future. These upcoming missions are part of NASA's Commercial Crew Program. To ensure that the capsule's special emergency egress system does in fact work, commercial crew astronauts participated in an escape test at Cape Canaveral Air Force Station's Launch Complex 41 in Florida on June 19. [Boeing CST-100 Starliner: Next-Generation Spaceship]

Photographers Kim Shiflett and Frank Michaux captured the scope of the test in captivating imagery for NASA's Kennedy Space Center. In an emergency, each person on board the commercial spacecraft would have to slide more than 1,300 feet (396 meters) to arrive at the safe area, according to photo descriptions provided by the space agency.

United Launch Alliance partnered with the zip line company Terra-Nova to build the evacuation system. It's similar to the slide-wire baskets that the agency used for space shuttle crews, and it features large seats to accommodate pressurized flight suits. The seats are also colored bright orange to make them easier to see.

The goal is to get astronauts and launchpad crew off the crew access tower and down to the ground in 90 seconds. As many as 20 people can evacuate through the egress system.

This emergency run-through seems all the more important following Boeing's "hot-fire" test of Starliner's four launch-abort engines back in June, when a propellant leak occurred. (The engine that the tests were performed on was not damaged.)

"We are confident we identified the root cause, and [we] are implementing corrective actions now," said John Mulholland, vice president and program manager of Boeing's Commercial Crew Program, on Aug. 1, according to SpaceNews. The publication said that Mulholland did not specify what that root cause was but said that corrective actions will include slight design and operational changes.