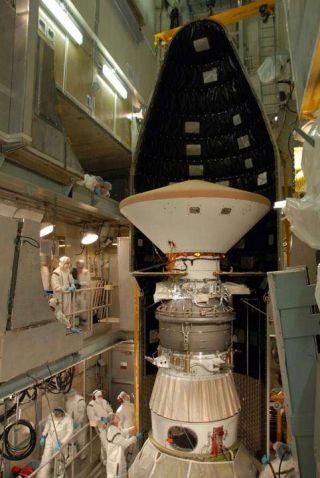 NASA delayedthe planned launch of its Phoenix Mars lander by 24 hours Tuesday as engineers tracean apparent cabin leak aboard the shuttle Endeavour for a separate spaceflight.

The twoclosely-spaced missions are slated to launch within days of each other fromCape Canaveral, Florida, with Phoenix initially targeted for an Aug. 3 launch andEndeavour's STS-118 astronaut crew aiming for an Aug. 7 liftoff.

But thethreat of poor weather Tuesday prevented pad crews from fueling the secondstage of the Delta 2 rocket to launch NASA'sPhoenix probe towards Mars from the Cape Canaveral Air Force Station. Thedelay forced mission managers to reset the planned launch for Saturday, Aug. 4at 5:26:34 a.m. EDT (09:26:34 GMT).

"Thunderstormsare rolling in so we're rescheduling the fueling for [Wednesday] morning,"NASA spokesperson George Diller, at the agency's nearby Kennedy Space Center (KSC), told SPACE.com. "There's not enough contingency time to get to thethird, so we're slipping one day."

NASA'sPhoenix lander is designed to study the northern polar regions of Mars using a robotic,shovel-like scoop to dig into the martian terrain and analyze theplanet's water ice. NASA must launch the $420 million mission within a 22-daywindow that closes Aug. 24 or else wait another two years until Mars and Earthare in the proper orbital positions for another attempt, mission managers havesaid.

Given Phoenix'slimited launch window, NASA space shuttle program managers have said the Mars missionis a high priority and could prompt a few days of delay for Endeavour's ownAugust liftoff. Currently, the Phoenix probe has launch opportunities throughSunday before any shuttle delays would be required.

"It'sstill too early to tell," NASA spokesperson Tracy Young, of KSC, told SPACE.comon whether a shuttle launch delay may be needed.

Young saidengineers found signs of the leak over the weekend and initially attributed itto a loose hose fitting on ground equipment. But the problem persisted after thehose fitting was addressed, leaving engineers once more scanning the crew andcargo module, as well as the pressurized tunnel and hatches running betweenthem, for signs of the leak.

"Rightnow we're troubleshooting and engineering is evaluating it to try to isolatethe problem," Young said.