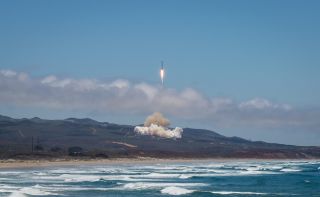 SpaceX most recently launched Iridium satellites on May 22.
(Image: © SpaceX)

Two rockets will go up — and one will come down — in a pair of commercial satellite launches early Wednesday morning (July 25).

The Arianespace launch, using an Ariane 5 rocket, will be the company's fourth of the year and will carry four Galileo satellites for Europe, according to a company statement. The Galileo satellites provide global-positioning services across Europe, and Wednesday's launch should complete the network.

The SpaceX launch, using a Falcon 9 rocket, will be the company's second of the week, after a launch from Cape Canaveral in Florida on Sunday, July 22. The company is planning to launch 10 additional Iridium satellites in this constellation, and this is the seventh launch of the series, according to a statement from the company.

The launch is scheduled for Wednesday at 7:39 a.m. EDT (1139 GMT, 4:39 a.m. local time) from Vandenberg Air Force Base in California. SpaceX completed a static fire test of the rocket on July 20, the company tweeted.

After the launch, the company will attempt to land the rocket on a drone ship called "Just Read the Instructions," SpaceX confirmed in a statement.

The launch may also include an attempt to catch the rocket's fairing with a giant net stretched across a boat called Mr. Steven. After a failed capture attempt on June 1, the company replaced the net with one four times the size. According to a recent tweet, the company said it intended to use the net sometime in July, which means it could be used for Wednesday's launch.

The Iridium satellites will join a fleet of 55 already in operation as part of the NEXT network, which keeps track of objects participating in the internet of things (IoT). After Wednesday's launch, SpaceX will have just one more batch of satellites to carry before the network is complete, according to a statement from Iridium.

Wednesday's launch comes just three days after the company's most recent flight, on Sunday morning. That rocket carried a Telstar communications satellite and represented the second flight of the company's Falcon 9 Block 5 rocket. Yet another Falcon 9 launch is scheduled for Aug. 2, as SpaceX continues an aggressive launch schedule.