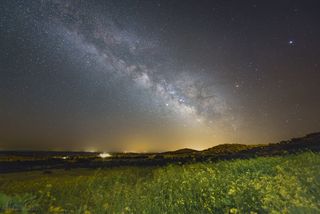 Captured during the spring equinox on March 20, 2018, this image shows a green field with small yellow flowers while Saturn and Mars shine against the core of our galaxy, as seen from Monsaraz in Portugal's Dark Sky Alqueva Reserve.
(Image: © Miguel Claro)

Miguel Claro is a professional photographer, author and science communicator based in Lisbon, Portugal, who creates spectacular images of the night sky. As a European Southern Observatory photo ambassador, a member of The World At Night and the official astrophotographer of the Dark Sky Alqueva Reserve, he specializes in astronomical skyscapes that connect Earth and the night sky. Join him here as he takes us through his photograph "A Spring Milky Way Shines Above Monsaraz."

The Milky Way galaxy shimmers over a field of yellow flowers at dawn in this photo taken from the village of Monsaraz in Portugal'sDark SkyAlquevaReserve.

This scene, captured on the spring equinox (March 20), shows Saturn and Mars shining against the core of our galaxy, with Mars very close to the Lagoon Nebula. In the upper-right corner of the image, the bright light that caught our attention is from Jupiter.

After spring arrives in the Northern Hemisphere, the central region of the Milky Way starts to become visible just above the horizon before dawn. The view gets better and better in the following months, reaching peak visibility in the middle of summer. In July and August, skywatchers can see the Milky Way's starry galactic coreby looking south early in the night (from sunset to midnight) from a dark-sky location. [Stunning Photos of Our Milky Way Galaxy (Gallery)]