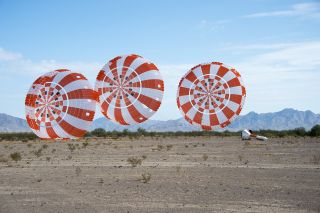 The parachutes for NASA's next crew vehicle, the Orion capsule, passed a drop test over the U.S. Army Proving Ground in Yuma, Arizona, on July 12, 2018.
(Image: © NASA)

The parachutes that will slow NASA's Orion crew capsule during its descent back to Earth aced an important test last week.

Orion's parachute system "deployed as planned after being dropped from an altitude of 6.6 miles [10.6 kilometers) on July 12, at the U.S. Army Proving Ground in Yuma, Arizona," NASA officials wrote in a statement Wednesday (July 18). "Data from the successful seventh drop in a series of eight qualification tests will help NASA engineers certify Orion's parachutes for missions with astronauts."

The last of those eight tests is planned for September, when the chutes will fly with a capsule that looks a lot like Orion, the officials added. (Last week's trial used a dart-shaped "test article.") [The Orion Space Capsule: NASA's Next Spaceship (Photos)]

NASA is developing Orion to help get astronauts to distant destinations such as the moon and Mars. The capsule has flown to space once: In December 2014, it launched on an uncrewed mission to Earth orbit called Exploration Flight Test-1. That mission ended, after 4 hours and two laps around Earth, with a successful, parachute-aided splashdown in the Pacific Ocean off the Southern California coast.

Orion's next spaceflight is another uncrewed test, called Exploration Mission-1 (EM-1), which will send the craft on a three-week trip around the moon. NASA plans to launch EM-1 — which will also be the maiden flight of NASA's new Space Launch System (SLS) megarocket — by June 2020, and perhaps as early as December 2019.

After that will come Exploration Mission-2 (EM-2), the first crewed flight of the Orion-SLS system. EM-2, which is scheduled to lift off in 2023, will launch four astronauts on a lunar flyby mission.

Each main parachute expands to a diameter of 116 feet (35 meters) when deployed in Earth's atmosphere, they added. But all this material is packed into a container the size of a large suitcase for loading aboard Orion. In its compressed configuration (which is achieved with the aid of hydraulic presses, baking and vacuum sealing), each main chute has a density of about 40 lbs. per cubic foot (640 kilograms per cubic m) — about the same as a chunk of wood from an oak tree, NASA officials said.