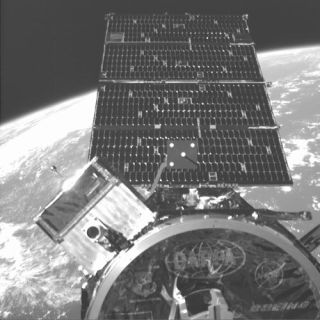 The prototype satellite NextSat poses with the Earth as a backdrop in this orbital view taken by its robotic refueling partner, the ASTRO spacecraft.
(Image: © DARPA.)

The two spacecraftthat comprise OrbitalExpress - the Boeing-built Autonomous Space Transport Robotic Operations(ASTRO) servicing spacecraft and the Ball Aerospace & Technologies-builtNextSat - were launchedtogether in early March on an Atlas 5 rocket. The in-orbit satelliteservicing experiment was sponsored by the U.S. Defense Advanced ResearchProjects Agency, or DARPA.

Over thelast four and a half months, ASTRO has demonstrated its ability to approachNextSat with limited interaction from the ground, grapplethe spacecraft with its robot arm and transfer fuel and hardware.

Accordingto an update posted Sunday on DARPA's Web site, the two satellites weredecommissioned after successfully completing one last maneuver thatdemonstrated ASTRO's ability to find and home in on NextSat from long rangewith an assist from the U.S. Space Surveillance Network. ASTRO then switchedover to on-board sensors to complete the rendezvous.

Thedecommissioning was to have begun July 5, but the Pentagon extended themission two weeks to allow the team to attempt the long-range rendezvousmaneuver. The final demonstration entailed putting enough distance between thesatellites that ASTRO's sensor suite lost track of NextSat, and thus requiredinput from the ground-based Space Surveillance Network to locate the targetsatellite and close in.

Themaneuver was initiated July 16 and completed over the next few days. By earlyJuly 21, Orbital Express flight controllers confirmed that they hadsuccessfully repositioned NextSat's solar arrays away from the sun and turnedoff the spacecraft's on-board computer. Flight controllers confirmed thefollowing day that ASTRO, too, had been successfully decommissioned, a processthat in addition to turning off the computer entailed dumping the satellite'sremaining onboard fuel.