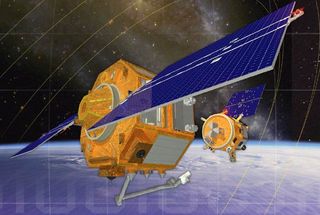 An artist's illustration of DARPA's Orbital Express spacecraft in orbit, with the ASTRO servicing vehicle (left) bearing down on NextSat.
(Image: © DARPA.)

OrbitalExpress is a roughly $300 million satellite-refueling demonstration led by theU.S. Defense Advanced Research Projects Agency (DARPA). It consists of a pairof unmanned spacecraft that were launched in March aboard an Atlas 5 rocket toconduct a series of experiments over a planned 90-day period. NASA contributed about $25 million to the project back in 2001 and engineers at the space agency's Marshall Space Flight Center helped develop the spacecraft's automated guidance system.

Sourcesfamiliar with the situation said NASA and DARPA had been quietly appealing tothe Air Force to keep Orbital Express on orbit a while longer, but were turneddown.

But NASAspokesman Dwayne Brown said June 29 that there was no disagreement between NASAand the Air Force about ending the Orbital Express mission.

?There isno dispute,? Brown said. ?We elected not to pay to do an extended mission.?

Tetherforwarded Kennedy?s status report to nearly two dozen U.S. governmentofficials, including Air Force Secretary Michael Wynne and NASA AdministratorMichael Griffin, explaining that the mission was about to complete its finalobjective and would be decommissioned at the request of the Air Force.

?This isthe last scenario for Orbital Express which has now set historical records forthe U.S. space effort,? Tether wrote. ?It was hoped that OE would continue forNASA missions. However the Air Force is unable to support any further OrbitalExpress missions; rationale unknown at least to me but offers of paying theground station cost for the next three weeks were rejected.?

Wynne,responding to Tether in an e-mail copied to the same long list of recipients,said he considers the upcoming decommissioning of Orbital Express a settledissue.

?As Iunderstand it; it was explained that the science aspects of the mission wereappreciated and completed. There is no intention to maintain this in orbitforever, and the offers of resources and the risk they offset from otheropportunities for learning about space operations have been evaluated. Greatwork by DARPA,? Wynne wrote, adding: ?I thus do not know what problem we aretrying to solve now??