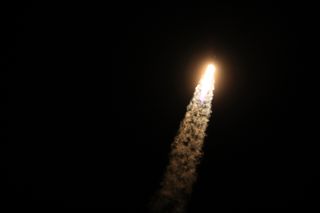 A SpaceX Falcon 9 rocket lights up the night sky over Florida as it launches a Dragon cargo ship toward the International Space Station from Cape Canaveral Air Force Station before dawn on June 29, 2018. The rocket is carrying many things, including student experiments to be completed on the space station.
(Image: © Kim Shiflett/NASA)

Glass beads, broccoli, severed worms, baby teeth and a whole lot of human spit are flying in space as part of student-designed experiments.

On June 29, students watched as the experiments they designed and built soared into the predawn Florida sky on their way to the International Space Station. The experiments launched aboard a SpaceX Dragon cargo ship on the CRS-15 cargo delivery mission for NASA, and the Dragon arrived at the space station this week.

The students were led by DreamUp, an organization that aims "to bring space into the classroom and the classroom into space," according to its website. The project involved students from four continents for this launch, as it aims to be inclusive, Carie Lemack, co-founder and CEO of DreamUp, told Space.com. [In Photos: SpaceX's Dazzling Dragon Launch to Space Station]

The participating students designed their experiments entirely on their own, and the concepts they came up with are both applicable to the real world and extremely creative, Lemack said.

One student team, from the Student Spaceflight Experiments Program (SSEP), a U.S.-based initiative, sent up a particularly unique experiment. Their study will examine how saliva decays teeth and how penicillin acts in microgravity, according to a statement emailed to Space.com.

For this experiment, the students had to mix a tooth with saliva. The group used real human baby teeth from one student, whose mom had saved them, according to Lemack. To prepare enough saliva to both send into space and use for the comparison experiment on Earth, the team also had to collect a lot of saliva. To achieve this, one student "spent 20 minutes spitting into a cup," Lemack said.

In another experiment, KSat e. V., a small student group at the University of Stuttgart in Germany, sent up a project called Pumped Application using Pulsed Electromagnets for Liquid relocation (PAPELL). This experiment will explore the pumping of ferrofluids, or liquids that become highly magnetized in the presence of a magnetic field, in microgravity, according to thestatement.

Another experiment, Planet Formation Due to Charge Induced Clusters on ISS (ARISE), was sent up by a student group from the University of Duisburg-Essen in Germany. ARISE and PAPELL were two of the three winners of the Überflieger contest, which was held in partnership with the German Aerospace Center. This experiment will use colliding glass beads to investigate the role of electrically charged particles in the creation of new cosmic objects, according to the statement.