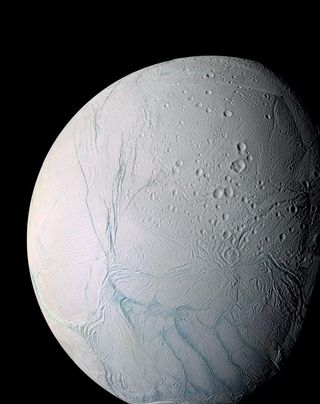 Carbon-rich organic molecules, which could potentially form the building blocks of life, have been discovered in the watery plumes spewing out from fissures in the surface of Saturn's moon Enceladus. The discovery enhances Enceladus' growing reputation as the best place in the solar system to look for life.

Enceladus' plumes were discovered emanating from numerous fractures called "tiger stripes," located in the 313-mile-wide (504 kilometers) moon's southern hemisphere, by NASA's Cassini spacecraft. The source of these plumes is an alkaline and mildly salty subsurface ocean in which life could potentially be found. Although the ocean is currently beyond our reach, the plumes provide a way of sampling the ocean from orbit.

Consequently, Cassini flew through the plumes on several occasions, "tasting" them with its Cosmic Dust Analyzer and Ion and Neutral Mass Spectrometer instrument. In new results published in the June 28 issue of the journal Nature, scientists have revealed that, during those plume dives, Cassini detected large, complex organic molecules. Previously, only very simple organic molecules, such as methanol, had been identified in the plumes. [Photos of Saturn's Icy Moon Enceladus]

Organic molecules are built from long chains of carbon atoms and are the main components of biomolecules — molecules that facilitate the biochemistry of life, such as DNA and RNA — and can be produced by biological processes. However, the presence of organic molecules does not necessarily mean there is life on Enceladus: organics can also form via geochemical processes involving interactions between water and rock.

In order to determine how the organic molecules formed, identifying their composition "is key to [their] origin," said Christopher Glein, who is a geochemist at the Southwest Research Institute in San Antonio and an author on the Nature paper.

Cassini was launched in 1997, almost a decade before the discovery of the plumes, and its instruments were not designed for sampling the plumes or distinguishing between complex organic molecules.

"We need the ability to identify which specific organic molecules are in the plumes," Glein told Astrobiology Magazine. "This will help us to determine if any of them, or any groups of them, can be considered biosignatures."

This isn't the first time that complex organic molecules have been detected elsewhere in the solar system. They've previously been found within carbonaceous chondritic meteorites, in the dust tails of comets, and in the atmosphere of another of Saturn's moons, Titan.

"What is special, though, is finding these materials emanating from a habitable liquid water ocean at Enceladus," said Glein, who describes Enceladus as "the only body besides Earth known to simultaneously satisfy all of the basic requirements for life as we know it."

Besides liquid water and complex organic chemistry, another basic requirement is a source of energy on which life can live. When Cassini flew through one of the plumes in October 2015, it detected molecular hydrogen thought to have formed in geochemical reactions in hydrothermal vents on the sea floor. If the hypothesis is correct and such vents exist, then they could be an ample source of nourishment for any microbes present in Enceladus' ocean.

With Cassini having purposefully dived into Saturn's atmosphere to end its mission in September 2017, there's little more that scientists can do until a new mission heads to Enceladus with instruments specifically designed to study the plumes.

Glein suggested to Astrobiology Magazine that any future mission will need to conduct high-resolution mass spectrometry of the plumes, and further mass spectrometry and gas chromatography in the tiger stripes on the surface, possibly followed by a sample-return mission, to really understand what processes are occurring on Enceladus and whether life could be at the heart of them.

"We don't know yet [what those processes are]," Glein said. "We're only seeing and appreciating the tip of the iceberg."