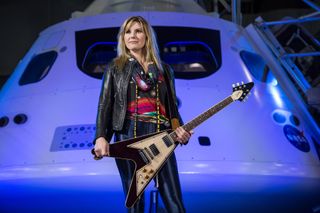 Grace Potter struck a chord with music lovers and space enthusiasts alike when she performed with the National Symphony Orchestra (NSO) Pops at The Kennedy Center in Washington, D.C., to celebrate NASA's 60th anniversary earlier this month.

Potter, a Grammy-nominated recording artist, is an unparalleled presence on stage. NASA asked her to perform as part of "NSO Pops: Space, the Next Frontier," a musical series in which the NSO, alongside guests like Potter and Coheed and Cambria, performed space- and science-fiction-inspired pieces to celebrate NASA's big anniversary.

Potter'svoice soared over the orchestra as she performed "Look What We've Become." Her vocal prowess and passion were evident in her performance as she honored women in space and science with her heartfelt song. [Grace Potter Makes NASA KSC Pit Stop During 'Midnight' Tour (Gallery)]

In 2016, NASA invited Potter to Johnson Space Center in Houston to collaborate on a music video for "Look What We've Become." The song and video highlight women at NASA and their contributions to engineering, science, aerospace and spaceflight. Potter performed this song at the anniversary event because it honors women in space and science.

In the video of the performance, it's clear that Potter is as comfortable performing with an orchestra as she is on stage with a rock band. Her striking voice carries with effortless power.

Potter has supported space and space-scienceefforts for years. Besides running the "Space_Potter" Instagram account, on which she posts space and science imagery, she has been known to talk about space news on stage. In 2015, Potter even spoke with Space.com about how space influences her and her music.

To follow Potter and her musical, cosmic adventures, visit gracepotter.com.