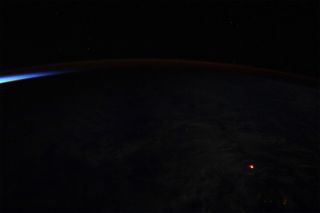 Astronauts in space have been tracking Hawaii's Kilauea volcano eruption since May, but they've never revealed a view quite like this.

This new photo from NASA astronaut Ricky Arnold shows the eerie, orange glow of Kilauea's lava flows from several fissures. Arnold snapped the photo early Wednesday (June 20), before the sun rose over Hawaii. A blue glow hinting at the upcoming sunrise is visible in the distance.

"The pumpkin orange lava flows of Kilauea aglow during the predawn hours over the Pacific Ocean," Arnold wrote in a tweet with the image.[In Photos: Hawaii's Kilauea Volcano Eruption As Seen from Space]

Arnold's photo is the latest view from space of Kilauea's eruption. Earlier this month, his crewmate and fellow NASA astronaut Drew Feustel snapped a stunning picture of a plume from Kilauea's lava as it plunged into the Pacific Ocean from Hawaii's Kapoho Bay.

NASA, the U.S. Geological Survey (USGS) and the European Space Agency have been regularly monitoring the volcano from space using satellites. On June 13, NASA's Earth Observatory — a repository of space-based views of Earth — released this video of the first few weeks of Kilauea's eruption in May, as seen by satellites.

According to a June 18 update from the USGS, the Kilauea eruption has continued unchanged in recent weeks. Lava continues to stream from several active fissures, with little sign of stopping.

"Fissure 8 fountains continue to feed lava into the well-established channel that flows to the ocean at Kapoho," USGS officials wrote in the update. "The flow front at the coast is about 1.5 miles across, but lava pours into the ocean at a single entry, creating a large laze [lava haze] plume."

Visit our sister site Live Science for updates on Hawaii's volcanic activity. Island residents can sign up for alerts from the County of Hawaii here.