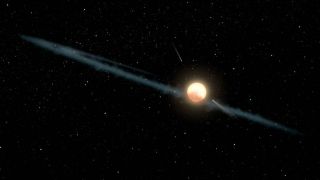 DENVER — The unusual object known as Tabby's star is still kicking up dust.

Astronomers later determined that the dimming is probably caused by dust. And now, two separate lines of research, one by a pair of high school students, are shedding further light on this obscuring cosmic debris. [13 Ways to Hunt Intelligent Aliens]

"This dust is more like a misty cloud than the dust you find in your home," Eva Bodman, a researcher at the University of Arizona, said during a press conference Tuesday (June 5) here, at the 232nd meeting of the American Astronomical Society.

Bodman found that various types of dust cause the star's strange signature. Yao Yin and Alejandro Wilcox also characterized the dust, using the observatory at the Thacher School in California, a private high school where the two will be seniors in the fall. They determined that at least some of the dust consists of large grains similar to what can be spotted in the interstellar medium, the space between the stars.

"We can confidently say we believe the obscuring material from [Tabby's] star is consistent with interstellar-medium dust," Yin said during Tuesday's press conference.

Soon after NASA's Kepler spacecraft first spotted Tabby's star, officially known as KIC 8462852, citizen scientists reported that the object was dimming in an unusual way. Explanations ranged from a debris disk to comets to the proposed alien megastructure. Further observations revealed that the star has undergone a more gradual, long-term dimming as well, its brightness dipping by about 14 percent between 1890 and 1989.

In December 2016, Yin, Wilcox and their classmates listened to astronomer Tabetha Boyajian speak on the subject. Boyajian was lead author on the "Where's the Flux?" study that announced the first observed change in brightness (hence the star's nickname). The talk inspired the students, they said.

"We were really impressed by the talk and the opportunities we see in our own observatory," Yin said.

Using their school's newly completed observatory, and with the help of their teacher Jonathan Swift, the pair observed the star in detail. Their results suggested that two different types of dust caused the long- and short-term changes in brightness. The students found that the dust particles involved in the century-long dimming are probably about the same size as dust grains in the interstellar medium.

Along with Swift, the two students intend to continue studying the unusual star through the end of this year, they said. And they may keep investigating the heavens after that, when they go to college.

"I love astronomy and space and would be happy to continue working with it in the future, during college," Wilcox said.

Yin expressed similar enthusiasm. "Astronomy sure seems really fun, and I sure would like to continue that," she said.

Bodman has also been studying the dust for the past few years, trying to get a better idea of what it could be. Her research, like that of the students, indicated that the particles that cause the mysterious star to change its brightness come in different sizes. But interpretations can be complicated by differences in composition. For example, she said, large, icy material would create the same signal as rocky dust that's been ground finely, like sand. Dust made purely out of carbon or iron would fall between those two extremes.

"What we're seeing is different parts of the cloud as they cross in front of the star," Bodman said.

If the cloud consists of small particles, astronomers may have caught a glimpse of a fleeting moment in the star's history. The star's radiation would quickly blow away small particles, which would disappear after only a handful of years, she said.

While it's possible that all of the dust is drifting aimlessly in the interstellar medium, Bodman thinks that it is actually orbiting the star. A circling cloud of material should create a repeating pattern of dimming, which seems to fit the observed behavior.

Unfortunately, current instruments probably won't be able to determine the exact composition of the dust. The European Southern Observatory's Atacama Large Millimeter/submillimeter Array (ALMA) in Chile has the capability, but it's only able to probe the makeup of objects in the Southern Hemisphere sky. There is no comparable instrument in the Northern Hemisphere that can get views of Tabby's star and provide such detailed insight, Bodman said. [Meet ALMA: Amazing Photos from Giant Radio Telescope]

However, NASA's $8.8 billion James Webb Space Telescope, which is set to launch in 2020, should be able to help researchers determine whether the material is rock or ice. Bodman said that by the time Webb launches, Tabby's star should be ready to kick off its next round of brightness dips.

Unlike most scientific research, Bodman's study is crowdfunding; it's part of the research supported by a Kickstarter effort to study Tabby's star. As a result of that effort, each of the dips has a name selected by one of the campaign's supporters. There's Celeste, Skara Brae, Ankor and Elsie, with the last being a play on the two-letter abbreviation for "light curve" (which is the brightness profile of a star over time).

"Thank you to all our Kickstarter backers," Bodman said. "This science is made possible by you."

Bodman has also considered what sort of phenomena could create the strange fluctuations. One option, she told Space.com, is that a cloud of material similar to the solar system's asteroid or Kuiper Belt surrounds the star, occasionally sending material in toward the star, where gravity might shred the matter. Such a belt would be too faint to be detectable by existing instruments (other than ALMA), but Webb should be able to see it, she said.

While Bodman said observations have shown that there is no massive planet as close to the star as Earth is to the sun, a massive, Jupiter-size world could be farther out. Just as Jupiter's gravity changes the orbits of solar system objects, an alien gas giant could stir up Tabby's asteroid belt (if it has one), sending material the size of the dwarf planet Ceres hurtling toward the star.

Though she hasn't yet simulated this scenario, Bodman said that the shredded remains of a relatively small object such as a comet could create the signal. There's even a slim chance that such a destroyed body could be as large as Pluto.

Whatever the cause, both professional and citizen scientists will continue to observe Tabby's star.

"Tabby's star is probably an oddity," Bodman said. "Oddities tell us the limits of what can happen, so they're always worth looking into."