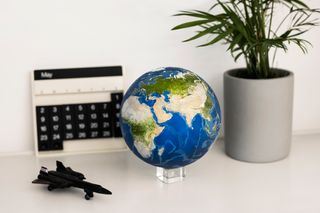 The Earth app lets users overlay a virtual view on a physical globe to learn about the planet.
(Image: © AstroReality)

An app featuring an augmented reality view of our planet soared past its crowdfunding goal in just a few hours.

The AstroReality app, called Earth, has raised more than $68,800 on Kickstarter. That's more than twice the project's $30,000 goal, with 42 days to go. It comes with a physical globe that ties in with the app's capabilities.

"Just open the app and point your phone's camera at the model for a deeply immersive learning experience," the app's Kickstarter page says. Earth includes information on animals, plants, geology, the environment, anthropology and meteorology. [Explore the Moon with AstroReality's Lunar AR App]

Users can also explore the globe using a smart voice technology called Gaea. To activate it, users just need to say, "Hey, Gaea!" and ask questions, such as, "How many people live in New York City?" The science facts were compiled in collaboration with J.R. Skok, a planetary scientist at the SETI Institute.

"We're passionate about our planet — it's the only home we have. Unfortunately, Earth is going through irreversible changes that are forever changing the surface of everything we know — from global warming and glacial recession to the extinction of its animals and wildlife," the AstroReality team, who created the Earth app, wrote on Kickstarter.

"We hope that educating everyone about the effects we have on our planet from fossil fuels, pollution and more will ignite a conscious change and passion for bettering the world as we know it," AstroReality wrote.

This is the second successful project crowdfunded by this group. The first one was a detailed augmented reality replica of the moon, called Lunar. That project quintupled its original fundraising goal, pulling in $214,064.