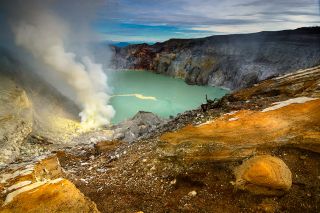 Small pools of water close to deposits of radioactive elements could have formed formamide, which could then have became a solvent for early life on Earth.
(Image: © MITq)

An organic compound called formamide could have acted in place of water as a solvent (meaning it can dissolve molecules) in early life on Earth, according to new research describing how formamide could have formed when exposed to natural concentrations of radioactive elements.

Water is essential to life as we know it, from the oldest primitive single-celled organisms to the vast panoply of complex multicellular life existing today. Water dissolves the organic molecules that life needs, such as amino acids and sugars. Water also ferries nutrients in and out of cells, and helps cells to communicate with each other by carrying signaling molecules back and forth.

However, water has a dark side to it, known as the 'Water Paradox', in which water actually hydrolyzes, or breaks down, nucleic acids and proteins — the building blocks of life. So how could our single-celled ancestors have formed in the first place? Formamide may hold the key. [Early Earth: A Battered, Hellish World with Water Oases for Life]

Formamide is made by the hydrolysis of hydrogen cyanide, which is in turn formed from hydrogen, carbon, and ammonia. It is not only found on the Earth, but also in star-forming regions within interstellar clouds, in comets and even in the interstellar medium. Formamide, along with minerals such as titanium dioxide, montmorillonite clays, monazite, apatite, iron-containing minerals, and zirconium, promote the formation of sugars and nucleobases, the building blocks for RNA, and amino acids, the building blocks for proteins.

How could such reactions have happened on the prebiotic Earth? In the primitive oceans, formamide concentrations were too low, on the order of one part per million, so that it was broken down as quickly as it was formed. Also, the formamide had to be concentrated to nearly pure mixtures and had to be in contact with the minerals mentioned above in order to do so. In addition, a large amount of heat is required to make the compounds necessary for life — the temperature has to be higher than the boiling point of water! Such a rise in temperature would be impossible in an entire ocean or lake, but not in smaller environments, such as grains of sand or puddles near geothermal hotspots.

Scientists have found that formamide can be made by mixing water with hydrogen cyanide and radioactive minerals. On the primitive Earth, radioactive minerals such as monazite, uraninite, and zircon could have been concentrated into deposits, or "placers," with shifts in the Earth's crust and flow of water in beaches and rivers. Under special circumstances, some "placers" may have contained very high amounts of uranium, forming natural nuclear reactors that could have generated enough energy to drive prebiotic chemistry.

Such a model, called a "nuclear geyser," has previously been proposed. It describes how formamide would be sufficiently concentrated and exposed to sufficient levels of radioactive energy and heat energy to produce prebiotic compounds.

In a paper published in Scientific Reports, a group of researchers led by Dr Zachary Adam, who is an evolutionary biologist at the Department of Earth and Planetary Sciences at Harvard University and the Blue Marble Space Institute of Science in Seattle, tested the hypothesis that compounds found in the atmosphere of the prebiotic Earth formed formamide when exposed to high levels of energy — alpha, beta and gamma radiation — from the decay of radioactive elements such as uranium. The research followed previous work by Adam, in which he found that uranium and thorium minerals mixed with carbon, hydrogen, nitrogen and oxygen compounds could produce a chemical precursor to formamide called acetonitrile — similar to what may have happened in radioactive deposits 4.3 billion years ago.

To simulate this setting, the investigators bombarded acetonitrile, which was present in water vapor in the Earth's atmosphere, with gamma radiation. They measured and identified the products with gas chromatography/mass spectrometry and found that the levels of formamide increased with the amount of radiation. They also heated the reaction mixture to over 100 degrees Celsius, the boiling point of water, to simulate heat generated in radioactive mineral—rich deposits. The water evaporated, leaving behind concentrated mixtures of formamide and other organic solvents that had formed from gamma irradiation. In addition, the acetonitrile was broken down and reassembled into acetamide, N-methyl-acetamide and N-methyl-formamide. This is important because when these molecules are mixed with phosphate minerals, phosphorylated compounds can be created, which are critical for the synthesis of the chemical building blocks of RNA, called nucleotides. [Laser-Zapping Experiment Simulates Beginnings of Life on Earth]

Based on their results, the scientists envision a scenario where, during wet periods, acetonitrile and hydrogen cyanide would rain down from the atmosphere onto deposits of radioactive minerals. A dry period would follow in which the water would evaporate, concentrating the formamide.

Adam tells Astrobiology Magazine that "We're looking at relatively rapid wet/dry cycles associated with tidal effects, or water inflow/outflow, or other kinds of short order cycles on the order of every few hours or so… around the periphery of geysers, volcanoes or other geothermal phenomena that experience both daily or hourly cycles of wetting/drying and heating/cooling combined."

Could prebiotic life develop elsewhere in the Universe? "The reactions that we studied can generally happen anywhere there is liquid water, nitrogen, carbon and radiation," says Adam. "Cosmic rays, radiation belts like those around Jupiter, and solar flares are all examples of other sources of energy capable of driving the same kinds of reactions through the production of highly energetic particles."

Vladimir Airapetian, a research scientist at NASA's Goddard Space Flight Center who has been a co-investigator in Adam's research, tells Astrobiology Magazine that he "believes these conditions could occur on any terrestrial-type exoplanet."

Adam concludes that his team's work shows that "the radiolysis chemistry [i.e. the breaking down of molecules by radiation] of hydrogen cyanide and water shows that it's possible to produce formamide at rates far higher than with conventional [water-based] chemistry alone. The possibility that water-based life originated in micro-environments dominated by a liquid other than water is a fascinating and developing area of research in the origins community. By micro-environments, we are thinking of the empty spaces between individual mineral grains, or maybe small puddles near or on the Earth's surface."