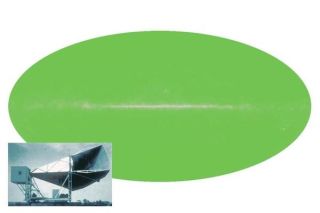 Today, the Big Bang model of cosmology is pretty much taken for Gospel, and for good reason. For more than fifty years, evidence gathered from all manner of sources has supported the notion that the Universe as we know it expanded from an infinitely dense singularity.

But things didn't always look so certain for the Big Bang. In its most nascent form, the idea was known as the hypothesis of the primeval atom, and it originated from an engineer turned soldier turned mathematician turned Catholic priest turned physicist by the name of Georges Lemaître. When Lemaître published his idea in the eminent journal Nature in 1931, a response to observational data suggesting that space was expanding, he ruffled a lot of feathers. As UC-San Diego professor of physics Brian Keating wrote in his recent book Losing the Nobel Prize, "Lemaître's model... upset the millennia-old orthodoxy of an eternal, unchanging cosmos. It clearly implied that everything had been smaller and denser in the past, and that the universe must itself have had a birth at a finite time in the past."

Besides questioning the status quo, Lemaître's primeval atom also had some glaring problems. For starters, there were hardly any means of testing it, a must for any would-be scientific theory. Moreover, it essentially suggested that all the matter in the Universe came from nothing, a flabbergasting claim. It also violated an accepted notion known as the perfect cosmological principle, which suggested that the Universe looks the same from any given point in space and time.

For these reasons, English astronomer Sir Fred Hoyle gathered with a few colleagues to formulate the Steady State theory of the cosmos. The idea kept the observable universe essentially the same in space and time, and it accounted for evidence suggesting that the universe is expanding by hypothesizing that matter is instead being created out of the fabric of space in between distant galaxies. Steady State didn't have the problems inherent to the notion of a primeval atom, and, as Keating wrote "it sure as hell didn't look like the creation narrative in Genesis 1:1."

Hoyle, however, did not. Over the decades, as more and more evidence lined up in favor of the Big Bang and against Steady State, the aging astronomer dug in his heels. Ironically, he behaved like the believing zealots he scorned, relentlessly defending his debunked theory until his death in 2001. Lemaître, on the other hand, remained humble and equivocal about the Big Bang throughout his life.

This scientific saga demonstrates that entrenched beliefs affect the nonreligious as well as the religious. In the end, bias should always bow to evidence.