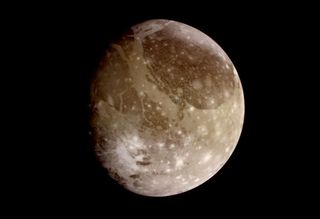 This image of Jupiter's moon Ganymede, the largest satellite in our solar system, was taken by NASA's Galileo spacecraft.
(Image: © NASA)

New data on Jupiter's moon Ganymede, coming from a mission 20 years old, highlights the ways in which this very alien moon is surprisingly Earthlike: Auroras shine over its polar caps, it's cocooned by a strong magnetic field and it might even harbor oceans.

In a new statement, NASA revealed that data from the Galileo spacecraft, which explored the Jupiter system from 1995 to 2003, is presently helping scientists get a fresh take on Ganymede's environment.

Ganymede is the largest moon in the entire solar system. It's just slightly smaller than the planet Mars and has a radius of 1,635 miles (2,631.2 kilometers). [Photos of Ganymede, Jupiter's Largest Moon]

Ganymede is also a unique solar-system body because it's the only moon with an internally generated magnetosphere. This magnetic-field region surrounds Ganymede like a bubble and shelters it from cosmic radiation. And, just like on Earth, the magnetosphere causes auroras near this moon's poles.

Scientists sought to learn more about why these glowing lights shine so brightly on Ganymede, according to the NASA statement, which was released on Monday (April 30). Magnetosphere research may also help us better understand how life might exist around solar-system moons or on exoplanets, the space agency said.

"We are now coming back over 20 years later to take a new look at some of the data that was never published and finish the story," Glyn Collinson said in NASA's recent statement. Collinson is the lead author of a recent paper about Ganymede's magnetosphere and is a research associate at NASA’s Goddard Space Flight Center in Greenbelt, Maryland. "We found there's a whole piece no one knew about," Collinson added.

The recent study analyzed one of Galileo's fortuitous observations. During a flyby, the spacecraft witnessed strong flows of plasma moving between Jupiter and Ganymede. This is possible because Jupiter emits radiation, too, not unlike the sun. According to NASA officials, the magnetospheres of Ganymede and Jupiter reconnected, causing the intense pump of plasma that would move toward Ganymede's poles and create the unusually bright auroras.

According to NASA officials, the Galileo PLS data collected during the strong-flow event may also provide new insights about Ganymede's subsurface oceans, which have the benefit of being shielded by Ganymede's magnetosphere.

The findings were published on Monday (April 30) in the journal Geophysical Research Letters.