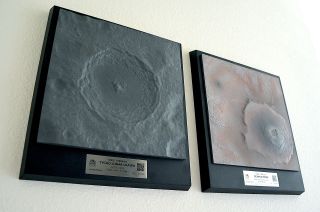 You can now decorate your desk or wall with the prominent features of the moon and Mars thanks to NASA spacecraft data and a Smithsonian partnership.

Master Replicas Group has introduced its first two "Space Terrains," scale models of the moon's Tycho crater and the Olympus Mons volcano on Mars. Each ten-inch (24.4-cm) cast-resin square is based on the information from NASA's Lunar or Mars reconnaissance orbiters (LRO or MRO).

"[We] combine NASA [laser] scan data with high resolution imagery of the lunar [or Martian] surface," states Stephen Dymszo, CEO and co-founder of Master Replicas Group, in a video describing how the Space Terrains are created. "Each complete file is then output on a $250,000 Stratasys machine with a resolution down to 16 microns. This results in a master pattern that showcases a staggering amount of detail in an area of less than a square foot." [Wow! Moon's Young Crater Seen in Close-Up View (Photo)]

The hand-finished moon and Mars terrains, which Master Replicas Group markets under its Smithsonian license, are available for $90 each.

'Stolen' from the Air and Space

Dymszo had the idea to make miniature planetary terrains while visiting the Smithsonian in Washington, DC a couple of years ago.

"We went to the Smithsonian and were taking a tour. They had a very large representation of a lunar crater there. It is huge and incredible," Dymszo recalled in an interview with collectSPACE. "I was with our graphics manager, Karl, and told him, 'You know, if somebody did this in a smaller size, it would be really cool. I would like to have one of these on my desk.'"

Fortunately, Dymszo would soon be in a position to be that "somebody." At a previous incarnation of Master Replicas, Dymszo had proposed a line of aerospace collectibles to go along with the sci-fi prop replicas they were then known for offering. So when Master Replicas Group re-launched and sat down with the Smithsonian, Dymszo knew what he wanted to create.

"When we got the Smithsonian's license, we proposed this idea for representations of topographical details," he said. "They asked, 'Where did you get the idea?' and we replied, 'We totally stole it from you — from the second floor of the National Air and Space Museum!'

It was another of licensed property that drove the choice of one of the moon's brightest craters as the first terrain.

"We came up with about 20 different features we could do, but decided that the first should be Tycho only because we also have the license with Warner Bros. for '2001: A Space Odyssey,'" said Dymszo.

The Stanley Kubrick science fiction film, released 50 years ago this month, features Tycho crater as the spot where one of the monoliths is found buried below the lunar surface.

Dymszo chose Mons Olympus, the largest volcano in all of the solar system, as the second of the company's terrains, but replicated it at a different scale than Tycho. The lunar crater is sized such that 1 inch equals 7.6 miles (2.5 cm to 12 kilometers). Every inch of the Martian mountain's model represents about 60 miles (96.5 km).

"Olympus Mons would be the size of your room if it was to scale to Tycho," explained Dymszo. "Also, as noted on the base plaque, we did a three-times magnification on the Z-axis on Mons Olympus, because when you use the actual scan data and output it, it is a pancake."

Master Replicas Group's third terrain will be a triptych.

"The next one is going to Valles Marineris, which will be in three sections," said Dymszo, in reference to the system of canyons on the Red Planet. "They'll be removable from the base, so you will be able to put all three sections together and recreate the entire escarpment on Mars."

The company is also looking at creating Copernicus crater on the moon, as well as another lunar location to coincide with an upcoming milestone.

The landing site models, based on LRO data, will include a painted overlay of the equipment on the moon. And like all of the Master Replicas Group Space Terrains, will include a QR code on its base plate pointing to more details about the site, its geography and history.