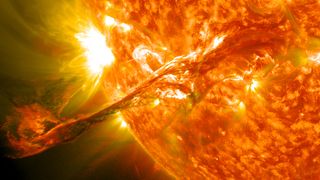 Giant plasma "tornadoes" raging across the surface of the sun don't actually spin like astronomers once thought, new research shows.

Massive solar tornadoes, formally known as tornado prominences, which were first observed about 100 years ago, seemed to bear a striking resemblance to tornadoes on Earth. These gigantic structures — each one several times the size of Earth — are made of hot, flowing gas and tangled magnetic field lines, ultimately driven by nuclear reactions in the solar core.

However, using a method known as the Doppler effect, scientists have precisely measured the speed of the moving plasma, as well as its direction, temperature and density, revealing that twisters on the sun do not rotate like earthbound tornadoes do, according to a statement from the European Week of Astronomy and Space Science (EWASS) conference. [Secrets of Sun Super-Tornadoes Revealed (Gallery)]

"We found that despite how prominences and tornadoes appear in images, the magnetic field is not vertical, and the plasma mostly moves horizontally along magnetic field lines," Nicolas Labrosse, lead scientist of the study and researcher from the School of Physics and Astronomy at the University of Glasgow in Scotland, said in the statement.

Up until now, astronomers had relied only on two-dimensional data, such as images taken by the Atmospheric Imaging Assembly instrument on NASA's Solar Dynamics Observatory. This data, however, creates a sort of optical illusion, the researchers said.

"We see tornado-like shapes in the images because of projection effects, where the line of sight information is compressed onto the plane of the sky," Labrosse said.

Instead, the new measurements using the Doppler effect add a third dimension to the data, allowing scientists to construct a more complete picture of the magnetic-field structure that supports the plasma, according to the statement.

Compared to tornadoes on Earth, which are formed from intense winds and are very mobile, solar tornadoes are composed of magnetized gas that appear to be rooted deep in the solar surface, therefore remaining in a fixed place, the researchers said.

"They are associated with the legs of solar prominences — these are beautiful concentrations of cool plasma in the very hot solar corona that can easily be seen as pink structures during total solar eclipses," Labrosse said in the statement.

"Perhaps for once, the reality is less complicated than what we see!" Brigitte Schmieder, co-author of the study and researcher from the Laboratory of Space Studies and Instrumentation in Astrophysics (LESIA) at l'Observatoire de Paris in France, added in the statement.

Their findings were presented Friday (April 6) at the European Week of Astronomy and Space Science conference in Liverpool, England.