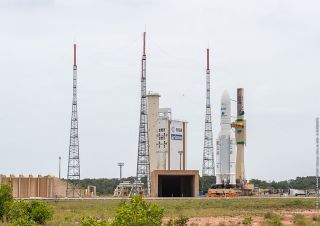 An Arianespace Ariane 5 rocket nears completion of its transfer to the launch pad at the Guiana Space Center ahead of a planned April 5, 2018 liftoff.
(Image: © Arianespace)

A European rocket will launch two communications satellites today (April 5) in its first action since a Jan. 25 anomaly, and you can watch the flight live.

An Ariane 5 rocket, operated by the France-based company Arianespace, is scheduled to lift off from the Guiana Space Center in French Guiana today at 5:34 p.m. EDT (2134 GMT). You can watch it live here at Space.com beginning at 5:19 p.m. EDT (2119 GMT), courtesy of Arianespace, or directly via Arianespace.

If all goes according to plan, the Ariane 5 will deliver the DSN-1/Superbird-8 and HYLAS 4 satellites to geostationary transfer orbit high above Earth, for Japanese operator SKY Perfect JSAT and British operator Avanti Communications, respectively.

Today's launch is the first for an Ariane 5 since Jan. 25, when the rocket dropped two communications satellites off in the wrong orbit. An investigation later determined that human error caused the anomaly; the wrong navigation coordinates had been entered into the Ariane 5's onboard computers.

Both satellites reached space safely on Jan. 25 despite the issue, but both will need to burn more fuel than expected to reach their desired final orbits, their operators have said.