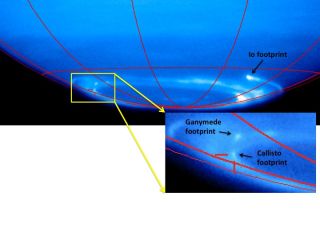 Three of Jupiter's most massive moons have created auroral bursts in the planet's atmosphere, but any footprints created by the fourth have remained a challenge to spot. A new look at data collected by NASA's Hubble Space Telescope has revealed tentative signs of charged particles from the fourth of these largest moons, Callisto. So far, only two potential footprints have been spotted, but they pave the way for locating more footprints that could reveal insight into the giant planet's magnetic field.

As Jupiter's rotating magnetic field sweeps past the planet's four large moons, called the Galilean moons, energy travels down the field lines connecting them to the planet. Callisto's auroral signature has managed to remain hidden because it orbits so far from the gas giant that its charged particles hit the planet at higher latitudes, near the polar region where Jupiter's primary auroral display lights up.

By examining archival images captured by Hubble in 2007, a team of astronomers was able to locate Callisto's signature for the first time. They looked for times when the planet's main auroras were dimmer or shifted to lower latitudes, allowing the moon's footprint to shine through. In five months of data, they found a single image where Callisto's auroral signature was visible.

"Fortunately, Callisto was not eclipsed by Jupiter on that day, and we were able to spot a footprint-like feature in the series of images taken," Dolon Bhattacharyya, lead author of the new research and a research scientist at Boston University, told Space.com by email.

Because a single image provides limited data, Bhattacharyya hopes that her team's discovery will pave the way for future footprint finds for Callisto.

On Earth, stunning auroral displays happen when the planet's magnetic field funnels charged particles flowing from the sun to its poles. Similar auroras occur on Jupiter, though unlike on Earth, the atmospheric displays are permanent, resulting in circular features less than 621 miles (1,000 kilometers) wide.

But Jupiter also boasts smaller auroras created by the planet's interactions with its four largest moons: Europa, Io, Ganymede and Callisto. These small auroral blips form as each moon's magnetic field interacts with the planet's.

Although far more massive than Earth, Jupiter spins on its axis once every 10 hours rather than Earth's 24, sweeping its magnetic field along with it. The moons travel around the gas giant at a faster pace, with Callisto making the trip about once every 17 days, compared to our own moon's 27-day trip around the Earth. As the natural satellites orbit the planet, Jupiter's magnetic field sweeps past them again and again.

"These moons then act as conductors in a rapidly changing magnetic field environment, and act like a battery with positive potential at one pole and negative at the other," Bhattacharyya said. "This produces disturbances in the magnetic field line that is in the immediate vicinity of a particular moon."

In addition, the moons are bathed in plasma particles streaming from the sun and generated by fellow moon Io's volcanic eruptions.

The four Galilean moons are all connected to the gas giant by magnetic-field lines. Interactions from the plasma and the planet's magnetic field cause the moons' field to vibrate as energy travels through them, accelerating the electrons in their vicinity.

"The effect is just like plucking a guitar string," Bhattacharyya said.

The electrons follow the magnetic-field lines from their parent moon into Jupiter's atmosphere, where the charged particles are deposited in the form of auroral displays. The shorter the distance between the moon and the planet, the lower the latitudes where the charged particles will land. Io, as the closest to Jupiter of the large moons, deposits the particles that create its auroral footprint at the lowest latitude, with Europa and Ganymede next. Callisto, the most distant of the four, leaves its mark at the highest latitudes.

In 1964, radio emissions revealed the first of these individual displays — those created by volcanic Io's interaction with the gas giant. In 2002, the Hubble Space Telescope revealed the auroral signatures of both Europa and Ganymede. Interactions of Jupiter's magnetic field with charged particles from the moon provide a valuable constraint for building models of Jupiter's magnetic field. Because Callisto is the most distant of the moons, it can provide insight into the planet's magnetic field at greater distances than its siblings. But the auroras generated by Callisto remained hidden.

In 2007, study co-author John Clarke, also at Boston University, used the Hubble Space Telescope to observe auroral emission at Jupiter, hoping to understand how the dynamic behavior of the planet's primary auroral activity was related to solar activity. In 2011, the researchers decided to take another look at these images, in hopes of spotting Callisto's elusive footprint.

"We were optimistic because of the large and continuous series of images taken over a period of five months [from February to June 2007] as part of this observing campaign," Bhattacharyya said.

The researchers hit the jackpot with an image from May 24, 2007. Jupiter's primary auroral emission& was "unusually dim," Bhattacharyya said, and had shifted to lower latitudes, leaving the signature from Callisto's charged particles to shine through.

A second image was found only two observing days later, on May 26, but the main emission was not as dim as that from the first set of data, and Bhattacharyya said the footprint disappeared completely within a day. That signature was classified as a probable candidate.

According to Bhattacharyya, the signature from Callisto is brighter than earlier theoretical predictions had anticipated. She attributed the difference to the Galileo spacecraft's discovery of a substantial ionosphere on Callisto, a thin atmospheric layer filled with charged particles, which such predictions hadn't taken into account.

The influence of Jupiter's strong and dynamic magnetic field stretches large distances. None of the spacecraft sent to Jupiter have been able to take important measurements in this charged environment, Bhattacharyya said. That's where the moons come in.

"We hope that by studying the location and variability of the footprints produced by these Galilean moons, we would be able to update the existing models for Jupiter's field and learn about its structures far away from the planet," she said.

She cautioned, however, that many factors could affect the brightness of the moon's interaction. That means a single footprint doesn't provide enough data to make firm conclusions about Jupiter.

The real power behind the new research is the insight into predicting future footprints for Callisto. Bhattacharyya said that previously, it would have been impossible to predict when Callisto's footprint might be visible next. The new data now makes such predictions a possibility.

NASA's Juno spacecraft will image the planet's polar orbit at both ultraviolet and infrared wavelengths. Bhattacharyya said that these images can be used to hunt for times when the main auroral oval is dim or has migrated to lower latitudes, making it possible to spot Callisto's auroral glow. Combined with images from Earth-based instruments, this increases the chances of spotting more of the moon's signatures.

"Since Juno is in orbit around Jupiter and will be passing over the poles frequently, it will be able to spot the footprint even when Callisto is eclipsed [or hidden] by Jupiter, and not visible from Earth, thereby doubling the probability of spotting Callisto's footprint," Bhattacharyya said.

The research was published in January in the Journal of Geophysical Research: Space Physics.