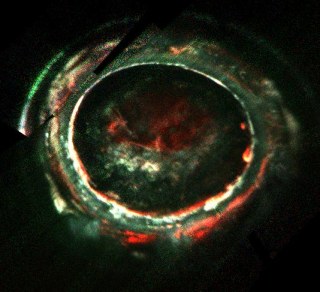 An image of Jupiter’s southern aurora, obtained by the Juno Ultraviolet Spectrograph (UVS) instrument on 2 February 2017. This image overlays three different UVS wavelength ranges and color codes them such that red, green, and blue indicate high, medium and low energy electrons impinging on the atmosphere, with color mixtures indicating a mixture of energies. The streak on the upper left is the auroral tail caused by Jupiter’s moon Io.
(Image: © G. Randy Gladstone)

What's powering the powerful auroras at Jupiter's poles? New results suggest it's not the same mechanism powering the most energetic auroras on Earth, contrary to scientists' expectations.

Jupiter's auroras are hundreds of times more energetic than those on Earth and don't radiate in wavelengths that are visible to the human eye. But both Jupiter's and Earth's light shows are manifestations of the same fundamental phenomenon: accelerated particles colliding with atoms in the atmosphere, releasing energy in the form of light.

Which is why researchers with NASA's Juno probe expected to find evidence that the charged particles that create Jupiter's auroras get their energy via the same mechanism that drives high-energy auroras on Earth, according to Barry Mauk, a scientist at the Johns Hopkins Applied Physics Laboratory and a member of the Juno collaboration.

In Earth's atmosphere, auroras are createdwhen the sun showers the planet with a stream of charged particles (known as the solar wind), which are pulled toward the poles by the magnetic field that wraps around the planet. The motion of charged particles along those magnetic field lines creates electric currents in the space above Earth’s atmosphere. This activity also creates electric potentials — think of them like power-up stations, where any charged particle that passes through gets an energy bump and is accelerated. If one of those accelerated particles comes down into the atmosphere and collides with an atom, the collision will cause enough energy to release visible light. This mechanism is responsible for the planet's most energetic auroras, which create those stunning light shows for viewers on the ground.

When a particle detector maps the particle energies around a powerful aurora, the researchers expect to see a peak where an electric potential is located. Mauk said they call those peaks "inverted V's," because that aptly describes the shape of the data line on the graph.

When the Juno probe began making close flybys of Jupiter, the spacecraft began collecting particle data with an instrument called the Jupiter Energetic-particle Detector Instrument (JEDI). (There is another particle instrument on Juno called Jovian Auroral Distributions Experiment, or JADE, that studies lower-energy particles involved in the aurora.) Mauk, who is principal investigator for the JEDI instrument, said researchers did see those inverted V's in their data, indicating these discrete electric potentials were accelerating particles above Jupiter's atmosphere.

"In one sense, this is a very simple result, because we observed huge electric potentials," Mauk said. "We've seen potentials of up to 400,000 volts, which is 10 to 30 times larger than what's been observed in Earth's aurora."

And yet, the results still puzzled Mauk and his colleagues, because the inverted V's appeared in only about 50 percent of Juno's flybys of Jupiter's most intense auroras. They simply couldn't be responsible for creating all of those intense auroras, even though this mechanism is responsible for creating Earth's most energetic auras. [AurorasOver Earth: Amazing Northern Lights Photos from Space]

Juno's orbit around Jupiter brings it close to the giant planet every 53 days. During those close flybys, the probe can be traveling at top speeds of 55 kilometers per second, or more than 123,000 mph (198,000 km/h). As a result, the instruments may be able to collect data over the auroras for only about 2 seconds, Mauk said. The authors noticed the discrepancy between their expectations and what the data showed them, after the very first science flyby. In their new paper, they confirm those findings based on data from four science flybys.

Based on their measurements of particle energies around the auroras, the authors think it's likely that rather than getting boosted to a specific energy level, the particles are being gradually accelerated to a wider range of energies. The mechanism is what the authors call "stochastic acceleration" or "turbulent acceleration," and it is responsible for creating some of the weaker auroras in Earth's atmosphere. (Typically, these auroras are not visible to the human eye.)

In turbulent acceleration, the particles are essentially catching a ride on waves in the plasma that lies just above Jupiter's atmosphere, according to Mauk. (Plasma is a gas in which the electrons that typically orbit the nucleus of an atom have been freed, or ionized). Like surfers on the ocean, the particles are accelerated by the waves.

"The wave exchanges just a little bit of energy with the electron. And then [the electron] goes on to exchange energy with another wave. And slowly but surely the particle gains a huge amount of energy by interacting with thousands of different waves," Mauk said. "The result of that is a statistical distribution of energy. Some particles have intermediate energy, some have very high energy, so you get a broad distribution of energy. That's what we see in the energy fluxes."

But this is still a hypothesis, Mauk said, and the researchers aren't sure yet how those waves are generated; if they emerge as a result of the energy potentials or from some other source.

Juno's orbit will take it on slightly shifted paths around Jupiter, meaning it will fly over different regions of the planet. The probe's orbit will also allow it to reach lower altitudes over the places where the charged particles are accelerated. (Lucky for the JEDI team, Jupiter's auroras are constant, because they are fed by the solar wind as well as a steady supply of charged particles from the moon Io.) Those low-altitude passes could "provide perspective that allows the differences between Earth and Jupiter auroras to be better understood," Mauk told Space.com.

The paper was published online today (Sept. 6 in the journal Nature.