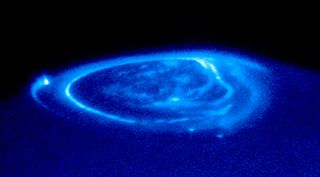 The blue aurora that is constantly glowing on the giant planet Jupiter.
(Image: © NASA/ESA/John Clarke (University of Michigan) )

Auroras are generated when electrically charged particles collide with a planet's atmosphere, where they excite gases and cause them to glow. The sun is the source of the particles that produce Earth's auroras, which are also known as the northern and southern lights.

Jupiter's auroras, which are sparked by particles from the planet's moons as well as the sun, are thousands of times more energetic than Earth's and many times bigger than Earth itself. They're also constant, but every once in a while they grow to an incredible intensity — the result not of a solar flare but of volcanic activity on Io, according to the new study. [Amazing Photos: Jupiter's Volcanic Moon Io]

Starting in January 2014, a telescope aboard the Japan Aerospace Exploration Agency's Hisaki satellite focused on Jupiter for two months. At the same time, NASA's Hubble Space Telescope also focused on Jupiter for an hour each day for two weeks. Both observatories recorded random brightenings of the giant planet's polar auroras.

These flare-ups occurred on days when the sun's usual flow of charged particles was relatively weak. So the researchers conclude that they must be the result of the complex interactions between Jupiter and Io, and perhaps the other three Galilean moons of Jupiter — Callisto, Ganymede and Europa. (These four satellites were discovered by Italian astronomer Galileo Galilei in 1610.)

Io, Jupiter's closest moon, gets "caught in this gravitational tug of war between Jupiter and the two other large moons, Europa and Ganymede," study co-author Andrew Steffl, from the Southwest Research Institute in Boulder, Colorado, told Space.com. "It gets squished and squashed," which drives internal heat just like if you bend a paper clip back and forth in your hands.

This process, in turn, drives a series of active volcanoes on Io. And when those volcanoes erupt, they blast large amounts of electrons and electrically charged atoms into space.

Jupiter's magnetic field catches these charged particles as it sweeps past Io and "forms a donut-shaped region of relatively high-density plasma around Jupiter," said co-author John Clarke from Boston University. This so-called magnetosphere is so large that it encapsulates all of Jupiter's 60-plus known moons and extends nearly as far as Saturn.

Over time, the particles in the magnetosphere interact with Jupiter's atmosphere, creating the beautiful, ghostly glow circling Jupiter's north pole.

This is one way Io contributes to Jupiter's auroras. But the moon also apparently causes flare-ups in the auroras, which are visible as bright spots in the glow. Io leaves such a "footprint," which occurs when charged particles flow directly toward Jupiter's atmosphere; these charged particles still travel through the magnetosphere, but they don't get sidetracked along the way.

Ganymede and Europa leave footprints as well, but the process is not well-understood; scientists are still trying to figure out how the complex Jupiter-moons-aurora dynamic works.

"What we'd really like to see is some sort of volcanic outburst happening on Io, where we see more material getting dumped into the plasma torus," he added. "And then we'd like to see a similar increase in auroral activity."

As both Hisaki and Hubble continue to monitor Jupiter, such evidence may just be one eruption away.

The study was published online March 25 in the journal Geophysical Research Letters.