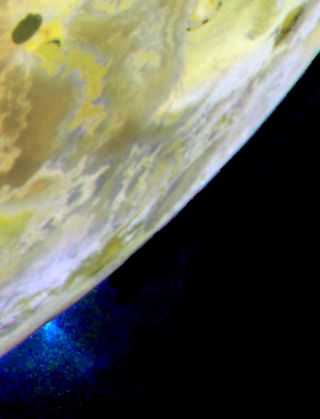 A volcanic plume ejects gas and particles about 60 miles (100 kilometers) above the surface of Jupiter's moon Io, the most volcanically active body in the solar system.
(Image: © NASA/JPL/University of Arizona)

The luminous auroras on the surface of Jupiter's explosive moon Io have revealed that the small satellite may not contain an internal magma ocean as previous studies had suggested.

A new study using observations by the Hubble Space Telescope provides a glimpse at oscillations in Io's auroras that are in synch with oscillations in Jupiter's magnetic field near the moon. But the authors of the study say that a subsurface magma ocean should suppress those oscillations.

"Our results indicate that a magma ocean cannot be present, so they contradict previous results," Lorenz Roth, a planetary scientist at Sweden's Royal Institute of Technology and an author of the new study, told Space.com by email. The main reason is that "we see the strong changes in the aurorae, which cannot be there if a magma ocean is present," he said. [Amazing Photos: Jupiter's Volcanic Moon Io]

On Earth, the dazzling auroras — also known as the northern and southern lights — form in the sky when charged particles from the sun are accelerated by the planet’s magnetic field and collide with other particles in the planet's atmosphere. The field lines route the particles toward the poles, where they interact with the atmosphere to create the variety of colors in the sky.

But Jupiter's magnetic field shields its moons from the effects of the sun, blocking charged solar particles from its satellites much as Earth’s magnetic field protects our planet from some types of solar radiation. Instead, the auroras on Io come from charged particles flowing off the gas giant itself. And unlike on Earth, the auroras shine over the moon's equator rather than its poles. Over the course of Jupiter's 10-hour rotation, the amount of charged particles striking Io varies.

"Io's auroras are always present, and it constantly changes brightness, by about 50 percent, over a rotation period of Jupiter," Roth said. "But it's always there."

During multiple flybys of Io in the 1990s, NASA's Galileo spacecraft measured the magnetic field of the moon. Based on these observations, scientists concluded that a churning magma ocean beneath the crust very likely generated this field. (The circulation of charged particles generates an electric current and a magnetic field, as is the case in Earth's core.) But the spacecraft’s measurements were taken at various points in Jupiter's rotation, and may not have revealed how much influence the planet had on the moon’s magnetic field.

"These measurements are very difficult to interpret, and the existence of a magma ocean is only one possible explanation," Roth said. "But we think it is not the only one."

By turning the Hubble telescope toward Io, Roth and his colleagues captured the aurora through a full Jupiter rotation over five orbits taken at the end of 2013 and the beginning of 2014. Orbiting Earth, Hubble lies anywhere from 390 million to 576 million (620 million to 925 million kilometers) from Jupiter. Despite its distance, the instrument provided a more extensive and detailed look at Io in ultraviolet light than the Galileo spacecraft was able to obtain.

"An electrically conductive magma ocean should suppress the changes [that cause auroras] but they are observed to be present and strong," Roth said.

One of the four largest Galilean satellites of Jupiter, Io is covered with 150 known volcanic hotspots. Enormous plumes of dust and gas explode from the surface, stretching into space.

While the new results suggest that a global magma ocean doesn't seem to lie beneath the moon's crust, that magma could still lie in scattered pockets, Roth said. Rock melted by heat inside Io, generated by the tidal pull of Jupiter, could power the volcanoes, Roth noted.

Based on the new research, Io's molten iron core may be larger than scientists previously estimated. According to Roth, gravity measurements place the core anywhere from 37 to 52 percent of the moon's radius, while the new results estimate it at between 38 and 68 percent. He said that a core spanning 40 to 50 percent of the radius — nearly half the size of the moon — would work well with all current theories and measurements.

"This relative core size is larger than for most other bodies," he said, though he pointed out that core size depends on the individual formation process of each object.

Roth said he thinks the new results sufficiently disprove the magma ocean theory. He added that a dedicated Io mission could reveal whether the moon's aurora has fine structures such as arcs or lines, or if it is simply a diffuse glow.

But the puzzle of Io's magnetic field isn't completely solved. Though the new measurements reveal that a magma ocean doesn't lie beneath the moon's crust, they don't fully resolve the earlier observations.

The technique used by Roth and his colleagues focused on the electric conductivity of Io. That means something else must be affecting the moon’s magnetic field.

"What we need now is a model that can explain both Galileo in situ measurements of the magnetic field and HST [Hubble Space Telescope] remote sensing observations of the aurora — with or without the magma ocean," Roth said.

The results were published in the Journal of Geophysical Research: Space Physics.