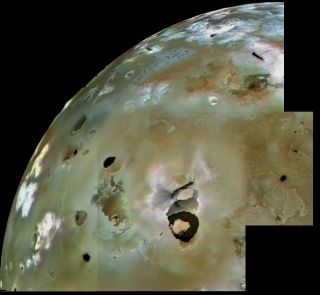 Jupiter's moon Io is covered with hundreds of active volcanoes that erupt from vast plains like Loki Patera seen here by NASA's Voyager 1 probe in March 1979. Scientists have been able to track these hotspots over time using Earth-based telescopes.
(Image: © NASA/JPL/USGS)

Two of the biggest telescopes on Earth have let astronomers capture some of the best views of long-term volcanic activity on Jupiter's moon Io.

Io is the most volcanically active body in the solar system. Using two of the world's largest telescopes, the 10-meter Keck II and 8-meter Gemini North, both located in Hawaii near the summit of Mauna Kea, astronomers from the University of California, Berkeley, tracked 48 volcanic hotspots over more than two years, from 2013 through 2015. [Amazing Photos of Volcanoes on Io]

The telescopes' adaptive optics systems use adjustable mirrors to cancel out the blurring effects of Earth's atmosphere. That means the telescopes can tease out features just a few hundred miles apart on Io, which is never less than 365 million miles away (587 million kilometers) from Earth. Io itself is about 2,200 miles (3,540 km) across.

"Of Io's hundreds of active volcanoes, we have been able to track the 50 that were the most powerful over the past few years," said Katherine de Kleer, a UC Berkeley graduate student who led the observations, in a statement.

De Kleer and Imke de Pater, a UC Berkeley professor of astronomy and Earth and planetary science, observed the heat of active eruptions and cooling lava flows. They were able to determine the temperature and the total power output of individual volcanic eruptions on Io.

Some eruptions appeared to trigger others, even hundreds of miles away. It isn't clear, though, exactly how that happens.

De Kleer and de Pater's findings will appear in the journal Icarus.