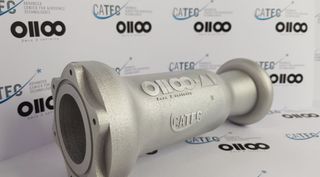 WASHINGTON — Spanish startup Zero 2 Infinity will use a 3D-printed combustion chamber for the engines it is developing to power its Bloostar balloon-assisted orbital rocket.

Spain's Andalusian Foundation for Aerospace Development (FADA), a non-profit that counts Airbus Defence and Space as a board member, printed the combustion chamber this month for Zero 2 Infinity, the company said March 22.

Bloostar is a launch vehicle designed to use balloons to rise above the densest layer of Earth's atmosphere before firing rocket engines to place satellites weighing up to 75 kilograms into low Earth orbit.

FADA's Advanced Center for Aerospace Technology, known as CATEC, created the combustion chamber that Zero 2 Infinity intends to use in its Teide 1 engines. The engine is named after an inactive volcano in Spain's Canary Island archipelago — the region Zero 2 Infinity plans to conduct Bloostar launches from.

Zero 2 Infinity intends to use 3D printing to lower the mass, cost, and environmental impact of the engines, as well as the time needed to build them. Working with CATEC, the company plans to apply artificial intelligence (AI) and neural networks to engineer more effectively cooled thrust chambers.

"Traditional rockets have had straight cooling channels because that's all that could be manufactured," Jose Mariano Lopez-Urdiales, founder and CEO of Zero 2 Infinity, said in a March 22 statement. "When you put a flashlight in your ear, you see a wonderful tree-like structure of blood vessels. We don't have straight rows of blood vessels in our ears. 3D printing and AI now allow rockets to evolve, like nature."

Zero 2 Infinity plans to launch Bloostar from Spain's Canary Islands, located west of Morocco. Last March following a subscale launch test, Lopez Urdiales said the company envisioned a first commercial launch in 2019. In a January interview with SpaceNews, he said the timeline for Bloostar may slip as Zero 2 Infinity focuses on its high-altitude balloon business, the company's main revenue-generating activity.

Last month, the European Space Agency chose Zero 2 Infinity as one of five study contract recipients for small launch vehicles. OHB subsidiary MT Aerospace of Germany is a partner on the ESA study.