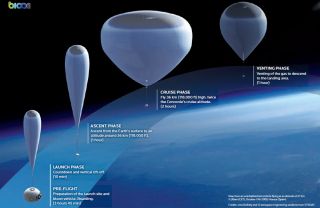 The phases of flight for a near-space balloon that would carry passengers high into the atmosphere for views of the Earth's horizon.
(Image: © Zero 2 Infinity)

A new tourist experience could be provided within five years by a huge balloon that offers stunning views of the horizon and the blackness of space. The designer tested the launch procedure last month, using a smaller version of the helium balloon and its passenger pod.

The May 29 test was halted when a wind gust damaged the balloon's envelope. The video description of the launch test said a repeat test of the balloon, designed by the Spanish company Zero 2 Infinity, is "scheduled soon."

The "bloon," as the company calls it, would carry a pressurized pod for two pilots and four passengers as high as 22 miles (36 kilometers) up. That "near-space" experience would be well below the 62-mile (100-kilometer) altitude considered the edge of space but still high enough for passengers to see the Earth's curved horizon, the thin blue atmosphere, and black space, even in daylight.

Zero 2 Infinity has been testing a half-size version, called microbloon 2.0. Past tests of the "bloon" technology included reaching a height of 20 miles (33 kilometers) in June 2010 and almost 15 miles (24 kilometers) in October 2010.

The company says the finalized "bloon" craft would offer travelers up to 25 seconds of the equivalent of zero-gravity, lunar gravity and Martian gravity, though it doesn't specify how — presumably through some version of free-falling. A parachute-style landing system and inflatable cushions beneath the pod would bring the passengers back down to Earth.

The Zero 2 Infinity website suggests the company is looking to begin commercial flights sometime between 2013 and 2015. It does not mention how much tourists would pay for the experience.

Space tourism companies such as Virgin Galactic have announced plans to offer suborbital rides to the edge of space 62 miles up, so Zero 2 Infinity may end up competing as a lower-cost option for people who care more about experiencing the view without flying close to space.

If everything works out, the Zero 2 Infinity flight would be tamer than some other human experiences with high-flying balloons. Austrian skydiver Felix Baumgartner has already completed a practice jump from a balloon capsule 13 miles high as he prepares to break the record for the world's highest skydive.