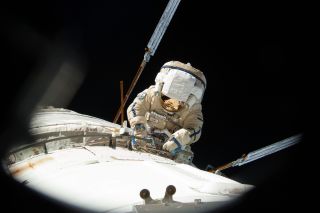 Cosmonaut Alexander Misurkin is pictured in a Russian Orlan spacesuit during a spacewalk outside the International Space Station on Aug. 22, 2013. This was the third spacewalk he performed during Expedition 36. Misurkin will take the fourth spacewalk of his career on Feb. 2, 2018.
(Image: © NASA)

Russian cosmonauts are taking a spacewalk at the International Space Station (ISS) today (Feb. 2), and you can watch the entire 6.5-hour excursion live online.

Expedition 54 Cmdr. Alexander Misurkin and flight engineer Anton Shkaplerov will put on a pair of Russian-made Orlan spacesuits before exiting the ISS through the Pirs airlock at 10:34 a.m. EST (1534 GMT). Live coverage of the spacewalk will begin at 9:45 a.m. EST (1445 GMT), and you can watch it live here on Space.com, courtesy of NASA TV.

During this extravehicular activity (EVA), the two cosmonauts will replace an electronics box for one of the communications antennas outside the Zvezda Service Module, one of the main segments on the Russian side of the space station. [Space Station Photos: Expedition 54 Crew in Orbit]

The spacewalkers will install an upgraded electronics box and jettison the old one, pushing it off into space, where it will eventually burn up in Earth's atmosphere, NASA officials wrote in the ISS blog.

If there's time left after replacing the electronics box, the crew can work on some optional "get-ahead" tasks. "A pair of exposed experiments, Test and Biorisk, are due to be retrieved and brought back inside the station," NASA officials said. "The cosmonauts may also photograph the back of Zvezda, reposition a foot restraint and jettison old experiment gear."

The Russian spacewalk will be the second this year following an EVA by NASA astronauts Scott Tingle and Mark Vande Hei on Jan. 23. NASA had planned a second EVA for Jan. 29, but flight controllers postponed it to Feb. 15 as they work to fix a software glitch that arose during the first spacewalk.

Today's spacewalk will be the fourth of Misurkin's career and the second for Shkaplerov, and it will be the 207th spacewalk at the ISS since construction began in 1998.