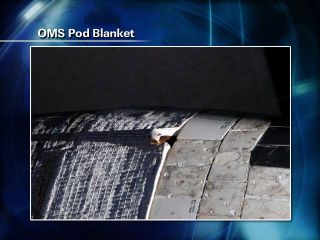 A view of the damaged shuttle blanket on the Atlantis orbiter's left Orbital Manuevering System pod during the STS-117 mission.
(Image: © NASA.)

Atlantis astronautsJim Reilly II and Danny Olivas are due to step outside the International SpaceStation (ISS) at 1:38 p.m. EDT (1738 GMT) today on a spacewalk primarily aimedat securing a tornheat shield blanket on the space shuttle Atlantis and forcing an old solararray into its storage boxes at the pinnacle of the orbital laboratory.

Reilly andOlivas are slated to spend more than six hours working outside the ISS on whatwill be the third spacewalk of NASA’s STS-117 shuttle mission aboard Atlantis.Commanded by veteran spaceflyer Rick Sturckow, the shuttle’s seven-astronautcrew has delivered a new crewmember, starboard trusses and two expansive newsolar arrays to the ISS during their planned 13-day mission.

Aboard thespace station, the three-astronaut crew of Expedition 15 will spend much of theearly part of Friday working with Russian flight controllers in work aimed at recoveringa critical set of computers responsible for Russian segment ISS systems.

First upfor Olivas will be the shuttle blanket repair, an ad hoc heat shield fix requiringthe use of medical staplers, a dental tool and wire pins.

While not arisk to the shuttle crew, the tear did expose a section of the OMS pod’sinternal structure prompting concerns that it could be damaged during reentryand require a lengthy repair back on Earth that could be avoided.

From aperch at the tipof Atlantis’ robotic arm, Olivas is expected to pat down the upliftedblanket, secure it to an adjacent blanket with two rows of medical staples, andthen anchor it into nearby heat-resistant tiles by using the dental tool topoke holes for the pins.

WhileOlivas repairs the blanket, Reilly will install a vent valve for a U.S. oxygengenerator to NASA’s Destiny laboratory at the ISS.

The bulk oftoday’s spacewalk is reserved for the space station’s starboard-reaching solarwing extending from the top of the outpost’s mast-like Port 6 (P6) truss.

For thethird day in a row, astronauts will work in concert to try and retract therecalcitrant array.

Atlantisastronauts Patrick Forrester and Steven Swanson poked and prodded snagged areason the 115-foot (35-meter) array to clear it for retraction duringa Wednesday spacewalk, but fell short of a full furling. Attempts to reelin the array via remote also made some progress, though jammed grommets held itfast at about halfway retracted.

Because theP6 array, known as P6-2B, initially crossed over the new starboard solar arrays,it had to be retracted clear of them so those new solar wings could rotate and trackthe Sun. Atlantis crew reached that benchmark on Wednesday, but now must furlthe array completely so the P6 truss can be relocated to its final position atthe end of the station’s portside in a later shuttle flight.