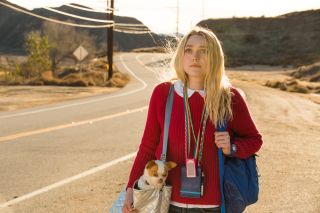 In "Please Stand By" (2018), Dakota Fanning plays Wendy, a young woman with autism who makes her way to Los Angeles to submit a "Star Trek" script for a contest.
(Image: © Magnolia Pictures)

Warning: This review contains spoilers for "Please Stand By," which premieres today (Jan. 26).

You're a smart young woman who holds down a job and watches "Star Trek" as a hobby. Then, the dream of a lifetime comes: You have the chance to send a movie-length script to Paramount Pictures for a "Star Trek" fan contest. Through circumstances beyond your control, you miss the mail and need to deliver the script in person. How do you go about it?

Magnolia Pictures' new film "Please Stand By" shows how Wendy (played by Dakota Fanning, known for 2005's "War of the Worlds" and the "Twilight" movies) deals with this situation. She lives in San Francisco and must make it to Los Angeles to deliver the script; her challenge is that she has autism, a spectrum disorder in which affected people have difficulty in communicating with others and "reading" the emotions of even their closest family members. [Biggest Space Movies to Watch in 2018]

Wendy's parents are no longer around, but she does have a sister, Audrey (played by Alice Eve, who "Star Trek" fans best know as Carol Marcus from 2013's "Star Trek: Into Darkness"). Audrey has a husband and a baby and feels she can't handle Wendy's care. So Wendy lives in an institution run by caregiver Scottie (Toni Collette, "The Sixth Sense"). The movie doesn't make it clear if the name "Scottie" is another "Star Trek" joke; she does share the name of a character in the original series (Montgomery Scott, or "Scotty"). At the very least, it's a fun coincidence.

In "Please Stand By," things get complicated for Audrey and Scottie. When Wendy misses the mail-in deadline, she runs away with her little dog, Pete. The rest of the movie follows Wendy's adventures from the moment she gets on a city bus. Her family and caregiver frantically search for her while Wendy runs into transportation problems. The movie has several Easter eggs for "Star Trek" fans, and is also a moving portrayal of how a young woman quickly matures and finds out she can take care of herself.

I'm not an expert on autism, so I cannot say how accurate the movie's portrayal of this disorder was. In the movie, Fanning's character had difficulties making eye contact, walked rigidly and overrelied on rules. While I was impressed by Fanning's performance, I think the movie overemphasized her disability at times.

Autism was portrayed in a different light as the movie went on: as a different way of viewing the world. This isn't the first time we've seen this in popular culture; the title of Oliver Sacks' 1995 book "An Anthropologist on Mars" is one person's description of how someone with autism feels while trying to figure out society. We all have moments like that — and yes, "Star Trek" characters ran into this all the time when they came across new societies. In classic "Star Trek," a prominent example is Spock, the half-Vulcan alien, half-human who is often confused by emotional Earthlings.

As Wendy thinks through lines for her script, at times she looks at the things around her and pretends she's looking through Spock's eyes. Yes, Spock is half-human and can't understand emotions all that well. But he feels them. He feels loyalty to his mission and especially his captain, James T. Kirk. Spock's rescue mission in the script runs parallel to Wendy's adventures when she runs away from home.

Wendy, like Spock, quickly realizes that logic is only part of the solution to living; we also need to deal with emotion a bit better.. I loved how whenever Wendy met strangers along her journey, she kept talking about her baby niece. It's obvious that Wendy cares about others; she just has trouble showing it at times. ['Star Trek' Quiz: 12 Questions to Help You Live Long and Prosper]

Using systems to get around

As a person who relies on organizational systems to survive the chaotic industry of journalism, I could sympathize with Wendy's desire to run her life by comprehensive rules. She has a sweater for each day of the week. She works out a procedure for how to greet customers at Cinnabon, her employer. When figuring out how much a bus from San Francisco to Los Angeles would cost, Wendy has a reasonable (but hilariously wrong) assumption — surely it would be no more than an intracity bus trip. They're both buses, after all!

At first, Wendy's systems get in the way. She throws a tantrum during a visit by a family member, because she hears something she doesn't like. She's too trusting with the first stranger she meets on the road. Wendy's predicament shows us that systems only get you so far unless you account for unpredictability, like an astronaut does when training for a space mission.

Yet, by the end of the film, Wendy's understanding matures rapidly. She figures out how to use systems to her advantage. When she's feeling unsure, she repeats, "Please stand by" to calm herself down.

By the end of her journey, Wendy has also become confident enough for constructive confrontations, instead of tantrums, including confronting an overly-strict mailroom employee who was threatening to make her mission impossible. " she . We cheer for her, because in that situation, she is doing exactly the right thing. [What I Learned by Watching Every 'Star Trek' Show and Movie]

I loved how even some of the people she encountered bent the rules themselves, including the police. Look for a cute cameo from comedian Patton Oswalt, who in trailers is shown as portraying a police officer who speaks Klingon to Wendy. Turns out, Oswalt's work partner is one of those "by the book" types; Oswalt gracefully sets the partner straight when she's about to throw the book at Wendy.

""Please Stand By" had me laughing out loud at not only the "Star Trek" references but also Wendy's encounters with people along her journey. With a cast experienced in science fiction, and screenwriters who obviously know the difference between "Star Trek" and "Star Wars," this movie is a fun watch even if you're just getting to know the Trek universe. Live long and prosper, Wendy.

"Please Stand By" opens in select theaters Jan. 26; it can also be found on iTunes, Amazon Video, Google Play and other on-demand services.