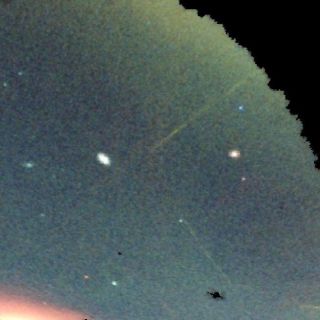 A project designed to help uncover the nature of dark energy and dark matter in our universe has found that alien stars from other galaxies have been infiltrating the Milky Way. The Dark Energy Survey has found 11 new streams of stars that do not originate from our own galaxy. These stellar streams are ribbons of stars that are the remnants of nearby dwarf galaxies or star clusters that have been gravitationally altered — or destroyed — by the larger Milky Way.

"We're interested in these streams because they teach us about the formation and structure of the Milky Way and its dark matter halo. Stellar streams give us a snapshot of a larger galaxy being built out of smaller ones," University of Chicago graduate student Nora Shipp said in a statement. Shipp led a large collaboration of astronomers studying the DES dataset to look for new stellar streams. "These discoveries are possible because DES is the widest, deepest, and best-calibrated survey out there."

The majority of the new stellar streams are found in the Milky Way halo, the outer part of our galaxy that contains gas and stars and is several times wider than the disk of our galaxy. The halo is also home to the Milky Way's globular clusters — tightly packed balls of hundreds of thousands of stars.

The main component of the halo, however, seems to be dark matter, the mysterious substance that appears to pervade the universe. It produces no visible energy, but its gravity tugs at the visible matter around it. Helping to understand dark matter and its equally mysterious companion dark energy are DES's primary goals.

The announcement of the discovery came in conjunction with the public release of the first three years of data from the survey. DES uses one of the world's most powerful digital cameras, the 570-megapixel Dark Energy Camera (DECam), mounted on the 4-meter Blanco Telescope, located at the Cerro Tololo Inter-American Observatory in northern Chile. Each of its images records data from an area 20 times the size of the moon as seen from earth. The data release includes information on millions of astronomical objects, including distant galaxies billions of light-years away, as well as stars in our own galaxy.

"The DES data release includes measurements of 400 million stars and galaxies, about twice the number of objects in the [Sloan Digital Sky Survey], the premier survey of the last decade," Knut Olsen said team leader from the National Optical Astronomy Observatory's data lab, said in a statement. "The survey data extend deep and wide to stars 40 million times fainter than the human eye can see, covering one-eighth of the entire sky."

DES has already released a series of detailed maps charting the distribution of dark matter in the universe and has mapped millions of galaxies.

Shipp's team wrote in their paper that "while DES was designed to provide the evolution of the universe, it has already had a major impact on near-field cosmology and galactic archaeology."

The team said while finding dwarf galaxies is extremely challenging because they are faint and diffuse, stellar streams are even more difficult to pick out because their stars are spread out over a much larger area of sky. According to the team's paper, the number of main sequence stars in each stream varies from about 1,000 to 10,000 from stream to stream.

"In big picture terms, these are small numbers of stars compared to the total number of stars in the Milky Way halo," Joan Najita from NOAO told Seeker.

Previous to the discovery of the 11 new streams, just 23 other stellar streams have been found. The new streams are the faintest and most distant streams ever discovered.

"In general, these newly detected streams are wider and lower surface brightness than those detected in previous surveys," the team wrote in their paper.

Alex Drlica-Wagner, a member of the DES team, said: "These discoveries are possible because the Dark Energy Survey is the widest, deepest, and best-calibrated survey out there."

The streams provide important information about the history of the Milky Way's formation and can be used to trace the local distribution of dark matter. The streams form when a small nearby galaxy or star cluster ventures too close to the Milky Way and the gravitational pull of our larger galaxy pulls out streams of stars from the wandering galaxy. Astronomers think that many interactions like these have contributed stars to the halo of the Milky Way.

RELATED: The Youngest Galaxies in the Universe Spin Like the Mature Milky Way

The new stellar streams have names such as Molonglo, Jhelum, Aliqa Uma, and Wambelong. The DES team reached out to schools in Chile and Australia and asked young students to select names. The names are aquatic words in native languages from northern Chile and aboriginal Australia.

Shipp and her colleagues wrote that they expect additional DES observations, improved data reduction techniques, and improved stream detection algorithms will allow fainter and more distant streams to be detected in the near future.

"While the DES data currently provide the most sensitive wide-area view of the southern sky," the team wrote, "they are merely a precursor for larger sky coverage that can be achieved with DECam and, eventually, the Large Synoptic Survey Telescope."

The LSST is currently under construction on Cerro Pachon in Chile.

"In the 2020s, LSST will deliver a yet wider and deeper view of the Universe — from distant galaxies, to our Milky Way, down to the solar system," said Adam Bolton, associate director for the Community Science and Data Center at NOAO, " and not just as a still photo, but as a high-definition movie that will capture the rich variability of the sky."