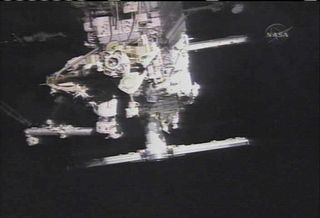 HOUSTON --A pair of expansive new solar arrays is due to creep slowly out of storageboxes outside the International Space Station (ISS) today after a successful installation by NASA astronauts on Monday.

Atlantisshuttle spacewalkers Jim Reilly II and Danny Olivas set thestage for today's planned solar array deployment Monday, when they freedmuch of the hardware slated to move into action today from the restraints thatlocked it in place for the launch spaceward. But there will be no going outsidethe ISS to unfurl the new solar wings today.

"The deployboth tonight and tomorrow is all ground commanded," Joel Montalbano, NASA's ISSmission operations representative, told reporters late Monday of the firststeps in loosing the new arrays. The remainder of the newStarboard 3/Starboard 4 arrays, which will stretch some 240 feet (73meters) from tipto tip at full extension, can be unfolded remotely by the astronauts insidethe ISS, he added.

Reilly, anSTS-117 mission specialist aboard Atlantis, is due to be at the switch,starting and stopping the deployment as needed.

"Everyperson on the crew will have a role because there are a number of things thatwe'll be watching for," Reilly said in a NASA interview. The astronauts will bewatching the tension in the arrays' wires, the panels themselves, and a tensionbar at the base of each panel to ensure they reel out properly, he added.

Built byLockheed Martin, the S3/S4 solar array wings (or SAWs) are each 115 feet (35meters) long and 38 feet (11.5 meters) wide with a gap between them at theirhub. Each wing weighs some 2,400 pounds (1,088 kilograms) and carries about32,800 solar cells to generate power from sunlight. The arrays themselves aredesigned to produce about one-fourth the total U.S. power supply for the ISS.

Rather thanunfurl all at once, the S3/S4 solar arrays will take baby steps to theirdeployment.

The processwas actually due to begin while the joint ISS-shuttle crew slumbered to extendeach solar array out of its erector set-like mast of pop-upbattens one full section. In all, there are more than 30 or so mast sections, or bays.

Each newsolar wing is expected to be partially deployed before the STS-117 crew awakes,then unfolded to about the halfway mark during the day to bake in the Sun.

"As youwarm them, it tends to release and lets the panels separate," Kelly Beck, NASA'slead ISS flight director for the STS-117 mission, said before the spaceflight.

The stickinessbetween individual solar panels after long stowed periods, dubbed "stiction" byNASA, first arose in during the space agency's STS-97mission in 2000, which delivered the first U.S. arrays to the ISS on the nowhalf-furled Port 6 (P6) solar wings. The first P6 array was deployed under alow-tension mode without warming and sufferedsevere stiction that ultimately pulled one tension wire free of its spool,prompting a spacewalk repair.

InSeptember 2006, the STS-115 astronaut crew installed the Port 3/Port 4 solararray trusses to the ISS. Those solar wings deployed without incident thanks tothe warming and high-tension technique.

"So allthis is based on lessons learned," Montalbano said.

By the endof the day, flight controllers on Earth should be able to tell whether the newS3/S4 solar arrays are generating their own power, Montalbano said. But theywill have to wait until an older P6 solar wing, which currently extends tostarboard over the S3/S4 truss, is hauled in later this week to activate thenew solar array's Sun-tracking rotation, he added.

In itscurrent configuration the older, starboard-reaching P6 solar wing crosses theS4 element's rotational path. Only once it is folded back into itsstorage boxes will the new starboard wings begin operations as planned.

"After theactivities [today] you'll get a feel for the functionality of the hardware,"Montalbano said. "But we won't be able to fully use it until we get the P6array retracted."