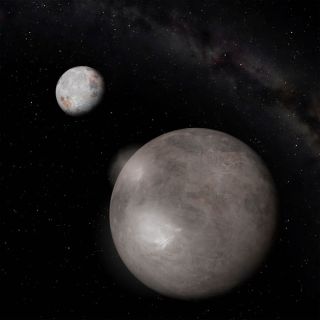 An artist's conception of Charon with Pluto in the background. The plumes and brighter spots depicted on Charon are thought to due to ammonia-laced water erupting from deep beneath the moon's surface.
(Image: © Software Bisque, Mark C. Petersen, Loch Ness Productions, Sky-Skan, Inc.)

Slushy geysers on Pluto’s moon Charon apparently coat the tiny world in ice crystals, making it something like the outer solar system's equivalent of an ice machine.

Water is likely trickling out at a glacial pace, researchers say, repaving Charon in a thin layer of 1-millimeter deep ice every 100,000 years.

The finding, announced today and detailed in the July 10 issue of Astrophysical Journal, hints at water ice inside Charon and has implications for other Kuiper Belt Objects—a class of relatively small, rocky bodies located beyond the orbit of Neptune.

There are no photos of the geysers or the ice. Instead, astronomers learned of the ice deposits after discovering the spectral fingerprints of ammonia hydrates and water crystals in light coming from the moon. The findings suggest that ammonia-laced liquid water from deep inside Charon is seeping out through cracks onto the moon’s frigid surface

The researchers ruled out other possible mechanisms for the ice and concluded it must be due to cryovolcanism—the eruption of liquids and from inside the moon.

If Charon’s ice were “primordial ice” left over from the solar system’s birth, it would have lost the crystalline structure astronomers observe now, due to bombardment by cosmic rays and ultraviolet radiation from our sun. And if the ice had been caused by meteorite impacts churning up the moon’s surface, a different set of chemical fingerprints would have been observed.

Cryovolcanism also occurs on other moons in the solar system, including Saturn’s moon Enceladus and the Jovian satellite Europa. However, both these moons are tidally squeezed by the strong gravitational tug of their giant planets, which forces water out through cracks.

The reserachers suspect something different is happening with Charon, which isn't tidally tugged by Pluto.

Instead, heat from radioactive materials in Charon’s interior might be creating a pool of melted water beneath the moon’s surface that is mixed with ammonia. “As some of the subsurface water cools and approaches the freezing point, it expands into the cracks in the ice shell above it,” Cook explained.

When the liquid water reaches the surface, it immediately freezes and “snows” back down onto the moon’s surface, creating bright ice patches that are visible in the infrared.

The ammonia functions like an antifreeze and prevents the liquid water from turning solid. “Like the antifreeze we’re familiar with here on Earth, it depresses the melting point of water,” said study team member Steven Desch, also of ASU.

Recent studies suggest that on Enceladus, tidal forces cause giant ice sheets to flex and grind against one another along enormous fault lines called “tiger stripes.”

Cook and his team think that something similar is happening on Charon, whose surface is almost completely covered in water ice.

“The real proof will come from the deep-space NASA probe New Horizons, which will arrive at this system in 2015 and send back images that can verify what we’ve seen,” Cook said.

The new findings suggest ammonia hydrates, and thus liquid water, might exist on other KBOs. “I think it has to be out there,” Cook said.