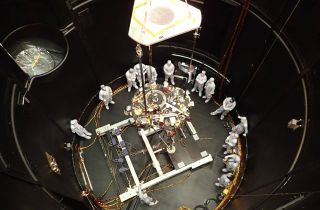 LITTLETON, Colo. — NASA's next Mars lander just passed a big test ahead of its planned May 2018 launch.

"Almost a two-week-long test, thermal vacuum testing is the most comprehensive and stressing test you can perform on a fully assembled spacecraft prior to its launch," said Scott Daniels, InSight assembly, test and launch operations (ATLO) manager at Lockheed Martin.

"With InSight coming out of TVAC, the team has successfully completed the environmental testing phase and will now be finalizing launch preparations over the coming months," Daniels told Space.com.

InSight will explore deep below the Martian surface, taking the Red Planet's vital signs — its "pulse" and temperature. If all goes according to plan, the craft should live up to its name, yielding insights about the planet's structure and formation. The mission's data should also be useful for future human explorers on the Red Planet, NASA officials have said.

InSight is scheduled to ship out to California in late February, Daniels said. The probe is due to launch atop a United Launch Alliance Atlas V rocket from Vandenberg Air Force Base, during a 30-day window that opens May 5. The scheduled arrival date on the Red Planet is Nov. 26, 2018, with the three-legged lander making a touchdown within a flat stretch of western Elysium Planitia, near the Martian equator.

This won't be InSight's first trip to California.

In late 2015, the Mars lander was at its launch site only to have a no-go edict scuttle its takeoff. The cause was a leak in the vacuum chamber surrounding one of InSight's two main instruments, the Seismic Experiment for Interior Structure (SEIS), a suite of ultraprecise seismometers provided by the French space agency, CNES. SEIS can gauge "Marsquakes" and other internal activity to better understand the Red Planet's history and structure.

That leak has since been fixed, NASA officials have said, and InSight should be good to go in May 2018. (Favorable alignments between Earth and Mars occur just once every 26 months, which is why the mission had to wait so long for its next launch attempt.)

SEIS and InSight's other major instrument — the Heat Flow and Physical Properties Package (HP3), which was provided by the German Aerospace Center (known by its German acronym, DLR) — will be deployed after landing by the craft's robotic arm.

SEIS is an extremely sensitive instrument; blustery breezes on Mars can create noise that interferes with the detection of seismic signals. Therefore, this device will be crowned by a shield to prevent wind gusts and temperature swings on Mars from influencing its insightful work. [What Is Mars Made Of? The Red Planet's Composition]

HP3 is built to burrow. The instrument will hammer itself down some 16 feet (5 meters) into the Martian subsurface to probe the planet's thermal history. Testing of this mole approach shows HP3 should be able to penetrate loosely bound soils, sand or regolith with a range of grain sizes (but not hard intact rock).

Another InSight science experiment, known as RISE, will precisely measure the Doppler shift and ranging of radio communications sent between InSight and Earth, to track Mars' rotation precisely. This information should allow mission team members to learn even more about the planet's interior, NASA officials have said. (RISE stands for "Rotation and Interior Structure Experiment.")

"We've mapped the topography of Mars, the geology, and we have a good characterization of the planet's atmosphere, ionosphere and exosphere," said InSight principal investigator Bruce Banerdt, of NASA's Jet Propulsion Laboratory (JPL) in Pasadena, California. "The deep interior of Mars was sort of the last piece in that puzzle." [The 7 Biggest Mysteries of Mars]

Know before you go

InSight will touch down at a spot that's among the smoothest surfaces ever investigated for landing spacecraft on Mars — "just a bland, normal place," Banerdt said.

InSight is perhaps the first Mars mission for which the landing site isn't really tied to scientific objectives, he added. That's a consequence of the lander's focus on the Martian interior. Once down on the planet, InSight will rest on unconsolidated regolith and quietly listen with its instruments for the tiny vibrations of Marsquakes and also sense small increases in temperature with depth.

Though InSight is not devoted to gathering data for human missions, the lander can nevertheless aid in the planning of future crewed efforts, Banerdt said.

"Both meteorite impacts and Marsquakes are potential hazards for human habitation on Mars, and InSight will do a good job of characterizing both of these. It's probably not the highest worry for a prospective astronaut but certainly something you should know before you go," he said.

"We hope to see on the order of a dozen impacts during the period of our mission, most rather small and within a few hundred kilometers, but we can detect something that makes a 10-meter [33 feet] crater out to over 1,000 kilometers [620 miles]," Banerdt added.

The seismic signals from such impacts have a characteristic fingerprint: "We know this from Apollo, which saw thousands of impacts on the moon," he said.

The hope is to find new craters in "after" images snapped by NASA's Mars Reconnaissance Orbiter (MRO). There is already near-complete coverage by MRO's Context Camera (CTX) out to over 1,860 miles (3,000 kilometers) from InSight's targeted landing site.

"If we can pinpoint the location of the crater/seismic event," Banerdt added, "it gives us a lot more leverage in using the seismogram to give us detailed crustal and upper mantle structure."

InSight looks a lot like NASA's Phoenix Mars lander, which found water ice near the Martian north pole in 2008. This should be no surprise; both spacecraft were built by Lockheed Martin.

InSight lands on three legs, each of which has crushable material to absorb impact energy. The individual legs are also equipped with special sensors that signal touchdown once the lander footpad begins to support the weight of the lander on the surface. At that point, all of the descent engines are shut down.

Stuart Spath, Lockheed Martin's director of deep-space exploration and InSight manager at the company, said that this propulsive-lander platform could handle other Mars missions as well. "If there are other instruments NASA wants to fly to the Red Planet," he said, "we're happy to provide a lander for them."

The propulsive-lander concept dates back to the 1970s and the Viking Mars touchdowns, Spath said. Since then, NASA has also used airbags to get hardware safely down on the Red Planet, as well as the rocket-powered sky crane employed to land the car-sized Curiosity rover. (NASA's 2020 Mars rover, which is based heavily on Curiosity, will also take the sky-crane approach.)

But propulsive landing is "kind of our method of choice," Spath said.