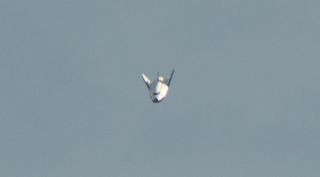 WASHINGTON — Executives with Sierra Nevada Corporation said Nov. 13 they believed the recent glide flight of a Dream Chaser test article was successful and they won't need to fly that vehicle again.

In a conference call with reporters, company officials said the Nov. 11 flight of the Dream Chaser engineering test article at Edwards Air Force Base went as expected. In that flight, the lifting-body vehicle was released from a helicopter at an altitude of about 3,750 meters and glided to a runway landing 60 seconds later, reaching a top speed of 530 kilometers per hour during its descent.

"We are announcing today a successful atmospheric flight test of Dream Chaser, and it is in our minds a signal that our program has moved another step closer to operations and orbital flight," said Mark Sirangelo, corporate vice president of Sierra Nevada Corporation's Space Systems unit.

Analysis of the data collected during that flight is in progress, but Sirangelo felt confident that the vehicle performed as expected. "Overall, our parameters in the test were met or exceeded, in our minds, and we feel very, very positive about this test," he said.

That will be verified by NASA, as the flight was a milestone in a commercial crew award known as Commercial Crew Integrated Capability that the company received in 2012. If it is, Sirangelo said it's unlikely this test vehicle will perform a similar flight, and will instead be placed in "flyable storage."

"We'll make the decision as we go forward in the coming weeks" about the need for another flight, he said. "If we have all the data that we needed from the test, and if NASA concludes that with us, the vehicle will not need any further flight tests."

When the company was focused on developing a crewed version of Dream Chaser, there were plans for additional glide flights, at higher speeds and with pilots on board, to simulate abort conditions, said Steve Lindsey, vice president of Space Exploration Systems at Sierra Nevada Corporation.

With the company now developing a cargo version only at this time, those flights are no longer needed. "Should we ever go do crew again, we would add those things back in," Lindsey said. "That's why we're going to keep this vehicle in flyable storage, should that ever occur in the future."

For now, Sierra Nevada Corporation is working on the cargo version of Dream Chaser to serve a NASA Commercial Resupply Services 2 contract it received in 2016. The first flight of the Dream Chaser under that contract will be in 2020; it will serve as both an orbital test flight of the vehicle as well as a mission to transport cargo to and from the station.

Elements of that first orbital vehicle are already under construction, Sirangelo said, even in advance of a critical design review scheduled for the middle of 2018. The vehicle passed a preliminary design review earlier this year, meaning "there were no showstoppers along the way for us to go fly the vehicle," he said.

The successful flight test was a relief for those at the company who have spent years working on the vehicle, including an October 2013 glide flight that both the company and NASA considered a success even though a landing gear problem caused it to skid off the runway after landing.

"It was, collectively for us, probably the longest minute of our lives watching it," Lindsey said. "But it sure was rewarding at the end when it touched down safely."