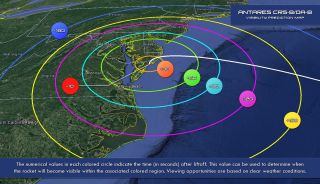 People from Connecticut to South Carolina may be able to see the planned Nov. 11, 2017, launch of Orbital ATK’s Cygnus cargo spacecraft toward the International Space Station.
(Image: © NASA)

Update for Nov. 11: The launch of Orbital ATK's Antares rocket and Cygnus cargo ship has been delayed 24 hours to Sunday, Nov. 12, at 7:14 a.m. EST (1214 GMT). It will still be visible along the U.S. East Coast. Full story: Orbital ATK Aborts Rocket Launch to Space Station Due to Wayward Plane

If you live on or near parts of the U.S. East Coast, you may be able to see a rocket launch Saturday morning (Nov. 11).

Weather permitting, folks as far north as Connecticut and as far south as South Carolina may be able to spot the arc of fire that the Antares carves into the sky as it climbs, according to visibility maps produced by NASA and Orbital ATK. (You can also watch the liftoff live online here at Space.com, courtesy of NASA TV.)

There is a complicating factor, however.

"We'll be flying into the sunrise, so it may make it a little harder to view it far down range," Kurt Eberly, Antares deputy program manager at Orbital ATK, said at a prelaunch news conference today (Nov. 10). "But near range, it should be plenty viewable."

And a lot of people will get a near-range eyeful: About 1,000 to 2,000 people are expected to watch the launch from the Wallops Visitor Center, Wallops spokesman Keith Koehler told Space.com.

To learn more about viewing launches from Wallops and the surrounding area, check out the flight facility's viewing guide here. You can also download the "What's Up at Wallops" app to learn how to see the launch from your location. And Wallops officials will post updates on Twitter and Facebook leading up to the liftoff.

Saturday's launch will kick off Orbital ATK's eighth commercial cargo run to the ISS for NASA. The Cygnus spacecraft — which is named S.S. Gene Cernan, after the late Apollo astronaut, who was the last person to walk on the moon — is loaded up with supplies, equipment and a variety of scientific experiments.

One of these investigations will study the effect of the microgravity environment on bacterial antibiotic resistance, and another will look into plant growth in space.

Editor's note: If you capture an amazing image of the Antares rocket launch that you would like to share with Space.com and its news partners for a story or photo gallery, send photos and comments to: spacephotos@space.com.